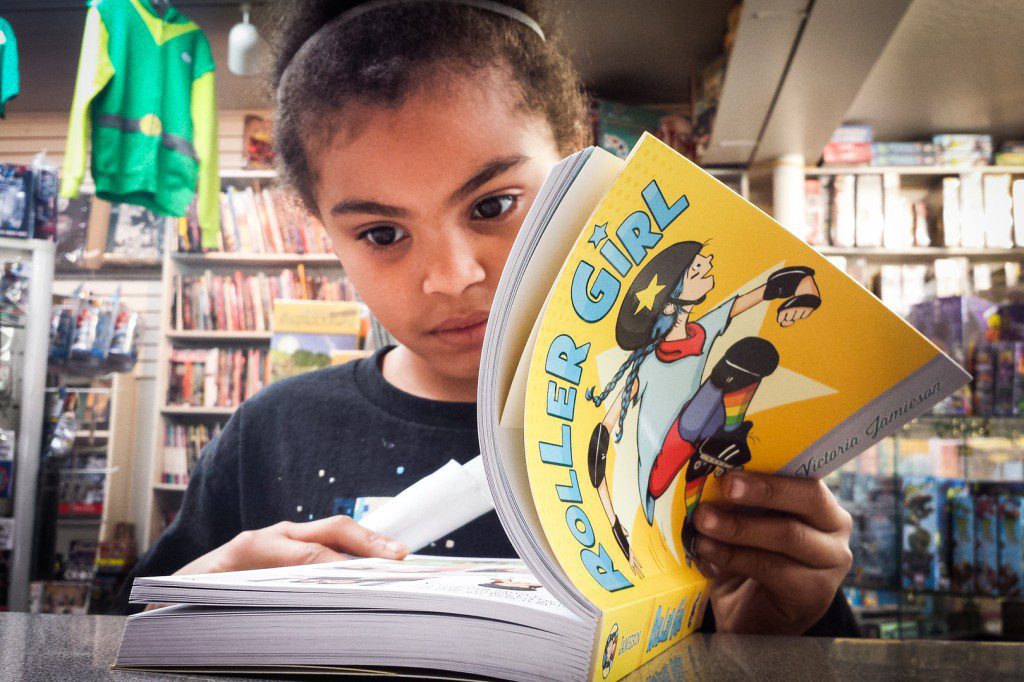 Nine year-old Gray Sansom-Chasin and his 13 year-old sister Zoa Chasin are sorting through comics at their home in Park Slope Brooklyn. They’re looking for examples of comic books that get it wrong. After pulling a late 90s Power Girl from the shelf and flipping through a few pages, they break into laughter at the sight of a drawing of a woman with a tiny waist and enormous breasts.

I know where she’s coming from. I’m queer, and black, and a big nerd, and I’ve always liked comic books. But it’s been hard to find characters who look and act like me, who aren’t offensive stereotypes, or worse, boring. Which has a lot to do with why I often look at comic books, but rarely spend the money to buy them.

In the mid to late 2000’s, comic books had a problem.The whole white guys in tights superhero thing had mostly created white guy readers — older ones — minus the tights. Readership wasn’t growing, and profits went flat for more than half a decade.

“We realize our characters were created 40, 50, 60, 70 years ago and the world has changed,” said Dan DiDio, the co-publisher of DC Comics. “We’ve got to change our characters along with them and diversify our cast, our voice. And really be able to connect with as many of our readers as possible.”

DC is trying to move beyond the model of a one-leotard fits all crowd pleaser like Superman. DiDio said the comic book publisher is going niche.

“You look at radio and television. You see how specialized different channels have become as they address certain people. And what we want to do, is provide different types of books to address the widest audience possible.”

In July, DC will relaunch half their comic book lineup. Didio said the 25 or so new titles will star completely new characters, more diverse in gender, race, and sexuality. They’ve also been revamping existing characters, which is tricky.

Last year, when DC Comics changed Wally West — AKA Kid Flash — from a white boy to a brown one, there was an internet firestorm, with frustrated fans on YouTube criticising DC Comics for making the change.

While some fans wanted their traditional, white Wally West back, I had different problems with the character change. When Wally went biracial, he came with a deadbeat dad, a graffiti habit and an arrest record. In other words, he came back as a stereotype.

Though, with other character reinventions, comic book publishers have gotten the mix right.

With Batgirl, DC took a character who’s been around since the early sixties, but today, instead of riding a purple motorcycle with frilly lace, Batgirl is getting her Ph.D. She lives in Burnside, a hip borough in Gotham — think Brooklyn — and she’s surrounded by a diverse group of friends, including one who’s transgender.

“Parents, they’re now bringing their daughters in to us to get their weekly comic which is the coolest thing to see. Dad’s coming in to get his Spider-Man and he’s like, ‘Oh, yeah, and I need a My Little Pony.’”

Women make up one of the largest growth markets for publishers. Over at Marvel Comics, a female character has proven herself worthy of possessing the power of Thor. Kamala Kahn, the publisher’s first lead character who’s Muslim, is one of the most talked about characters in comics today.

It’s easy to take a cynical view on all of this diversification — that comic book publishers are just looking for sales, not taking the high road. But Rodrigues says the new diversity is a welcome change from when she was a kid and comic book stores had little to offer young women except Archie.

I’ve found a new favorite character: Bunker in the Teen Titans comic book, is flamboyantly gay and Latino. It’s important for me to see brown characters who aren’t muggers and who don’t speak in slang. Being able to follow a character who, like me, is both brown and gay is what keeps me interested and invested in a comic book.

It’s also what makes me actually willing to buy one.