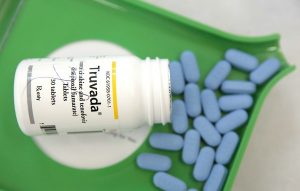 The FDA has approved a daily pill called Pre-Exposure Prophalaxis, or PrEP, which can reduce the risk of HIV infection by 86%. It’s the first and only treatment of its kind, but the Centers for Disease Control recommends caution when prescribing PrEP to adolescents. They’re waiting for final results from medical trials on young people being conducted in cities across the country.

Leon Richardson is 18 years old and part of CRUSH, an HIV prevention project in Oakland, California that offers PrEP to participants. Richardson is tall, charismatic, and thoughtful about his sexual health. He understands that as a young gay black man, he is in the demographic with the highest rate of new HIV infections in the country. But when Richardson learned that he could be part of the research study about PrEP, at first, he was skeptical.

“I was scared. I had to really think about it, what is this drug going to do to me?” he said.

Richardson’s Mom stoked his concerns.  “She was saying the medical industry tried to sterilize some people; they were trying to do it again,” he remembers.

But Richardson found encouragement from another family member. “Well actually I talked to my grandfather and he’s HIV+,” he recounts, “so we had a long discussion about this drug and what the side-effects could be, and he overall supported me totally. And it was kinda like, why not? Let me just try it.”

Currently the FDA has approved PrEP for individuals who are HIV negative. It’s covered under most insurance plans.  The market for HIV-related drugs and services is lucrative. According to one report, its value is estimated at more than $18 billion a year.  But for research studies, Gilead, the company that makes PrEP under the brand name Truvada, donates the medication.

In Chicago, Daniel Zeh is part of a PrEP study based at Stroger Hospital. He was 17 years old when he started taking the pill. The daily regimen was sometimes hard to explain.

“I guess it was kind of weird during high school, popping it before lunch, trying to make sure nobody sees,” Zeh chuckles. “People are like, what are you taking? Nothing, you know, just a sugar pill.”

Zeh first heard about the Stroger Hospital study on Facebook. Outreach coordinators also turned to gay hook-up apps, like Grindr and Jack’d, to recruit possible subjects. It’s a clever strategy, even if it’s awkward to run into a researcher when you’re looking for a date. Dr. Sybil Hosek, the lead researcher, offered to pay participants $50 per visit to the clinic, and when enough guys said yes, the psychologist got to work.

“What we wanted to do was design a study where they could try to take this pill everyday,”  she explains, “and see whether one, they were interested in taking it, two, if it was hard for them to take it, and three, how it impacted their sexual behavior.”

For instance, would being on the pill encourage more risky sexual activity?

Dexter Canty, who is also enrolled in the Chicago PrEP study, says people have a lot of misunderstandings about the pill and individuals who take it. Inside a conference room at the hospital, a group of the guys in the study share stories about what it’s like to be on PrEP. They’re often asked, “Are you HIV positive?” when in fact they’re taking the drug to prevent getting infected. Canty compares the reactions he’s experienced to people’s perceptions when he goes to the drugstore to buy condoms, or when a woman goes to Planned Parenthood and gets birth control. “You’re automatically looked at as being promiscuous instead of safe,” he says.

The idea is PrEP would be used with condoms, but critics worry that the pill will make users feel invincible, increasing the likelihood that they wouldn’t use condoms, or follow through on taking the pill every day. Andrew Weinstein, President of the Los Angeles based, Aids Healthcare Foundation, is against PrEP-use, especially by young people.

“Young people have unstable lives. They’re sleeping on someone’s couch. They’re out for the weekend and that’s not to stigmatize them, it’s just the nature of youth. It’s a carefree time, expecting people to take a pill everyday is not realistic,” says Weinstein.

It’s enticing to imagine a magic pill that could bring about the end of AIDS. But a recent study of young people taking PrEP shows that they take it, at best,  60% of the time. And when you miss doses, the pill becomes less effective.

This story was produced by outLoud, a project of Youth Radio