Megan Macpherson stands at the front of her sixth grade classroom, 2012. 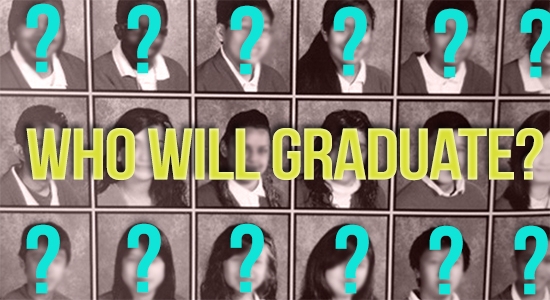 I remember the first student I ever suspended. He was 13 years old.

It started off as a minimal disruption. He was stealing pencils from other students at his table. That turned into breaking pencils. Then, stealing homework.

Determined not to let him derail the entire class, I changed his seat. I went over to him, and quietly said, “Can you tell me what’s up? I know you can behave better than this.” He swore at me in two languages.

I gave him a five-minute timeout in the hallway. He came back in and kept throwing and stealing. Finally, another student got so irritated, she threw a pencil back at him. And before I knew it, he had her in a headlock.

I didn’t think twice. I just made him disappear for a week.

I wasn’t a seasoned teacher. I was a couple feet shorter than many of my students, and younger than many of their siblings. It’s hard for any teacher to see the big picture in every disciplinary action we take, and how it can impact a student’s education. But it does.

I’ve been out of the classroom for three years now, and for the past year, I’ve been following teachers, students and school districts, trying to understand the latest research on school suspension and its effects down the line.

I met Robert last spring. He was a talkative, skinny kid with lots of energy. It was the end of his sixth grade year, and Robert had already been suspended three times. One more time, and he knew he would be expelled.

[Hear students at Robert’s school speak about their experiences with suspension.]

Students with a record like Robert’s are at risk. Robert should be entering high school soon, but 49 percent of students who entered high school with three suspensions on their record eventually dropped out of school, according to a new report out of Johns Hopkins University by Robert Balfanz, “Sent Home and Put Off Track.”

And research shows that most students who get suspended end up getting suspended twice, causing some researchers to say that suspension is not an effective tool for changing behavior — something that teachers can tell you instinctively. 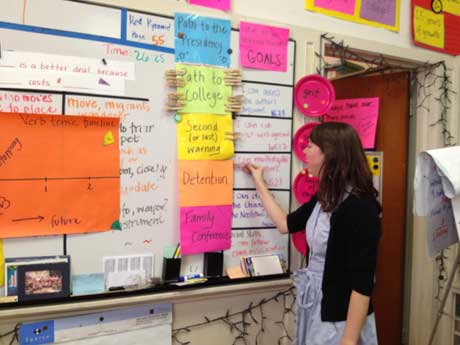 (Above: Megan Macpherson stands at the front of her sixth grade classroom, 2012.)

“It’s been really hard to keep kids invested in school, because once they fall behind, it’s embarrassing to be behind their peers, and to take that risk to try. It’s almost too much,” said Robert’s former teacher, Megan Macpherson, who worries about her students moving on to middle school where there will be less individualized attention to keep them on track.

When students transition from elementary school to secondary school, their chances of being suspended increase from 2.4 percent to 11 percent, according to a recent study out of UCLA.

And once they do get suspended, they’re more likely to drop out.

Researcher Robert Balfanz found that students who were suspended once in ninth grade, dropped out of high school twice as often as their peers who were not suspended.

In Robert’s school district, administrators are actively trying to reduce suspensions. Between 2004 – 2011, the district cut its suspensions in half through restorative justice strategies like the youth court program at Richmond

High School. In this program, students are trained to act as lawyers, judges and jurors. They listen to both sides of a problem and then decide appropriate consequences other than suspension.

Another popular strategy for lowering suspension rates in schools is Positive Behavior Interventions and Supports (PBIS). This strategy revolves around intentionally creating a positive culture in schools to prevent negative behavior from occurring.

Dr. Rob Horner is a Professor of Special Education at the University of Oregon and an expert on PBIS. He says the method is used in over 8,000 schools and has even caught traction with the White House.

“The reason educators feel the compulsion to use techniques like detention, suspension, expulsion, is because they say, ‘This child’s behavior detracts from the educational opportunities of everybody else.’ We’ve learned if you focus on the front end to prevent problem behaviors, the number of these situations go way down,” Horner said.

And some interventions are more informal.

Last year, I spoke with an eighth grade teacher, Wesley Pepper, who decided to keep his struggling students close to the chest. “I have a student in the class that I teach who has been labeled ‘behavior problem,'” said Pepper. “He struggles to stay in his seat. He loves to flirt with female students even during a test. And he’s not going to obey just because some teacher says he has to… He’s a very smart kid and I want to teach him. However, he’s been labeled a behavior problem for as long as he’s been at my school.”

In this case, Pepper basically decided to do whatever it would take. He refused to send the student out of class, because he expected that to trigger expulsion and possibly turn into a stay at juvenile hall. Towards the end of the year, he was seeing results.

“Maybe nobody has ever advocated for him before, or maybe he realizes this is his last chance… But now he’s a B student, and moving towards that A. He’s on the verge of having a new label: ‘College Bound.’ That’s a label all students should have,” said Pepper.

I taught eighth grade in a school that was close to being taken over by the state because of its low performance. Schools in this position are often encouraged to set a hard line with students — you’re in or you’re out. That doesn’t exactly encourage new teachers to be flexible with students and get to know them.

Reflecting back on my years as a classroom teacher, I wish I had prioritized keeping students in school. But at the time, it felt impossible. I did feel compelled to use suspensions to keep my class under control. Getting a knock from the teacher next-door asking me to “keep it down” only made me more desperate to get rid of noisy students.

Now I’m realizing, that I might have been getting rid of them for good.

* California Schools Try Out A Gentler Form Of Discipline