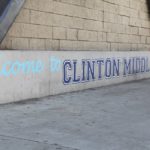 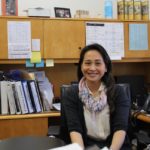 Principal Sissi O’Reilly says EWIs have allowed her to be better at her job. Credit: Alyson Bryant. 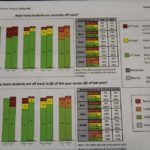 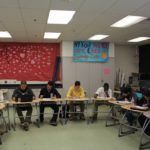 At 8 a.m., teachers sit in a classroom to look at student data. Credit: Alyson Bryant. 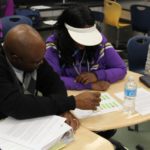 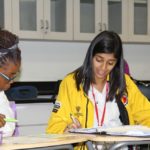 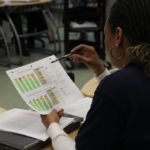 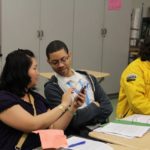 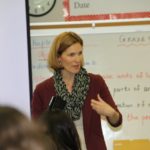 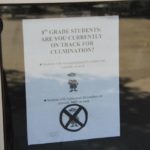 This sign is posted in the school office window: Are you on-track to graduate? Credit: Alyson Bryant.

More teachers are looking to detailed data to figure out which students are most likely to drop out of high school, long before the kids have even entered ninth grade. Though this flagging system can call attention to a need for additional help to a potential dropout, there may be concerns, like inaccurate predictions, or worse, lowered expectations.

At Clinton Middle School in East Los Angeles, teachers are using a system called Early Warning Indicators, or EWI, which is part of a school transformation program called Diplomas Now currently used in 14 cities around the country. The system is based on recent research out of Johns Hopkins University that shows what specific factors best predict the likelihood of dropping out of high school. The warning system uses three data points – suspensions or behavior, attendance, and grades in middle school — to identify kids at risk of not making it to high school graduation. According to an op-ed written by Diplomas Now in the New York Times, in the 2012-13 school year, “the program achieved a 41 percent reduction in chronically absent students, a 70 percent reduction in suspended students, a 69 percent reduction in students failing English and a 52 percent reduction in students failing math.”

Here’s how it works: After reviewing the trends, the teachers examine students’ names that are colored red or yellow, considered off-track or in danger of being off-track. At Clinton, signs of being off-track include coming to school less than 85% of the time, getting a bad behavior grade, or an F in any class. Students who show two or more of these signs are flagged.

The teachers then discuss the circumstances around each student, things like how often he or she visits the nurse, or what’s going on in the family. Then they brainstorm interventions. These can be simple, like saving an extra breakfast for a student, or more involved, like assigning tutoring or Saturday school.

Though teachers have always kept students’ needs in mind when grades have dipped or behavior has changed, typically those decisions were made within the teacher’s own classroom. Teachers don’t always know what’s going on in the classroom next door, and it’s fairly rare to have time carved out of the school day just to problem-solve around student data. Likewise, students often don’t realize that teachers are paying attention to their personal lives.

At Clinton, a student doing poorly in math class is every teacher’s problem, because that student is considered more likely to drop out. The faculty meets every month, hoping that within a month, they can bump a student back on-track — a process they call “recovery.”

But does being off-track definitely mean that a student will drop out? The kids interviewed at Clinton are in seventh grade and only 12 years old. Can data accurately predict if one of them is going to drop out of high school five years down the line?

That’s a question Chris West is wrestling with, based on his work developing an Early Warning Indicator system for Montgomery County Schools in Maryland. His system flagged “at-risk” students as young as first grade. One of his concerns is whether all this information can even be acted upon. He found that 76 percent of the students who dropped out had these warning indicators, but 47.4 percent of the non-dropouts had these indicators, too. What’s the risk of “mis-predicting”?

Ultimately, West said if you identify someone incorrectly, but they still show signs of disengagement, the effects of intervening could still be positive.

David Yeager, an adolescent psychologist at the University of Texas, worries that early warning systems could undermine a student’s resilience. “What if what’s the cure for under- performance in middle school becomes a disease when they move on to college, because they’ve been told they can’t do it on their own?” he said.

At Clinton, the students don’t necessarily know that they’ve been flagged. Principal Sissi O’Reilly said that her staff never uses the term “at-risk” to describe students. And because the teachers are intervening as soon as a student slips up, the interventions themselves can be small. “I’m not putting out fires, going around trying to solve problems. I’m supporting the system that supports individual kids,”said O’Reilly.

But English teacher Jason Black says he thinks it is okay to tell students outright if they’re being targeted. “I think that actually makes them feel good, knowing they have a team behind them, knowing that they have a lot of people they will let down,” said Black.

Eighth-grader Gabby said that she appreciated the intervention, because she already knew she was messing up. “My math teacher, she came to talk to me, she pulled me out individually and told me about my grades and she said English needs to be better… Then my history teacher pulled me out as well, so I knew that they really cared,” said Gabby.

And teachers end up grading themselves too, using the data trends to set goals for their own classrooms.

Creating the structure for this kind of data-driven attention doesn’t come cheap. There are almost as many support staff at Clinton as there are teachers, to provide wrap-around services, according to the principal.

Gabby went from an F to a B in English. But what happens when Gabby graduates from Clinton, and this strong support network disappears? For Andrea Schwartz who crunches the data at Clinton, that’s her biggest concern. “It keeps me up at night… How do we build up these kids so that they have a solid enough foundation that they can go on and progress?”

Outside of the Clinton campus, early warning data are collected on students throughout the Los Angeles School District. But according to Cynthia Lim at the Office of Data and Accountability, other schools don’t have the human capital to help teachers analyze and respond to that data consistently.

This piece was produced by Youth Radio, in collaboration with Voicewaves Youth Media.