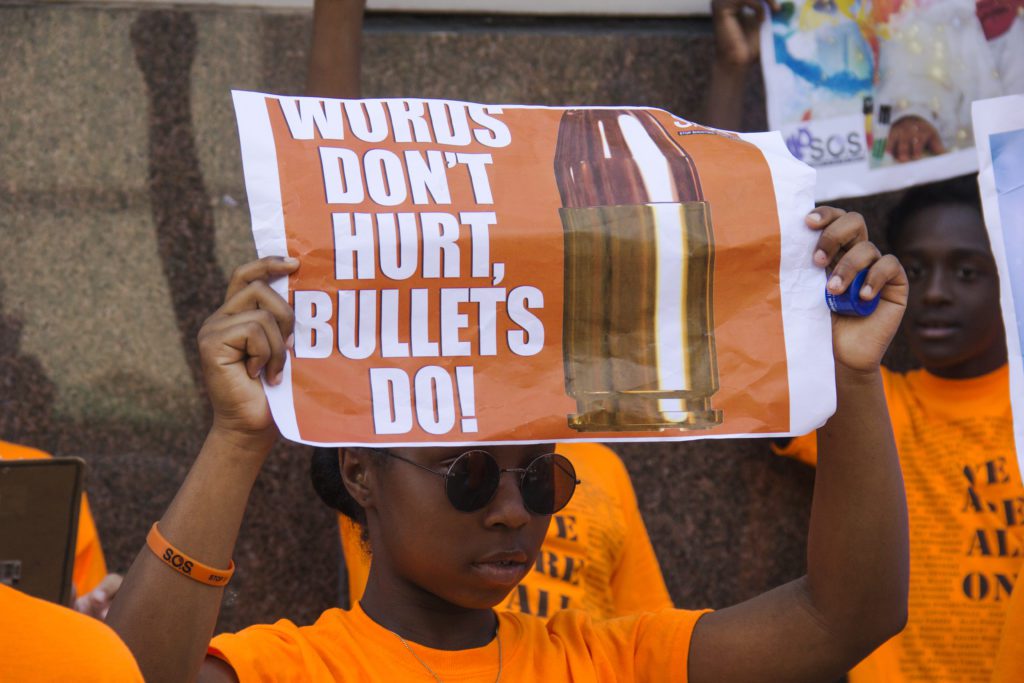 Kayla Attz, holds a sign that reads, “Words don’t hurt, bullets do!” Students designed signs for the march in their Digital Media class as a part of the anti-gun violence curriculum. Image: Sayre Quevedo

Once again gun violence is front and center in America’s political awareness.

While the debate rages on about what–if anything–can or should be done about the waves of mass shootings and other types gun violence, students at Launch Expeditionary Learning Charter School in Crown Heights, Brooklyn, took to the streets last week in a show of their commitment to address the issue.

On Friday, June 9th, seventh graders from Launch marched from their school to a rally at Restoration Plaza amphitheater, where the student body president kicked off a series of speakers from the school and community, in partnership with the Save Our Streets (SOS) Crown Heights organization.

Here are some images from the event: 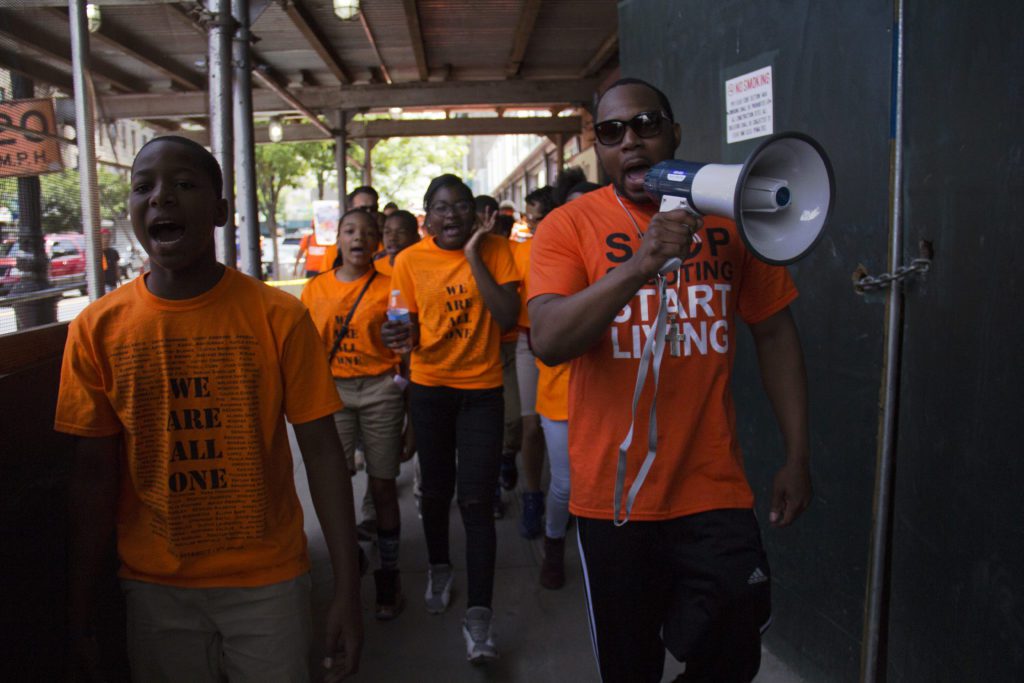 Thierry Elliot and fellows students march with Dequann Stanley, Violence Interrupter Supervisor at Save Our Streets (SOS), an organization in Brooklyn that has charged itself with “interrupting” gun violence through counseling and mediation. Image: Sayre Quevedo/Youth Radio 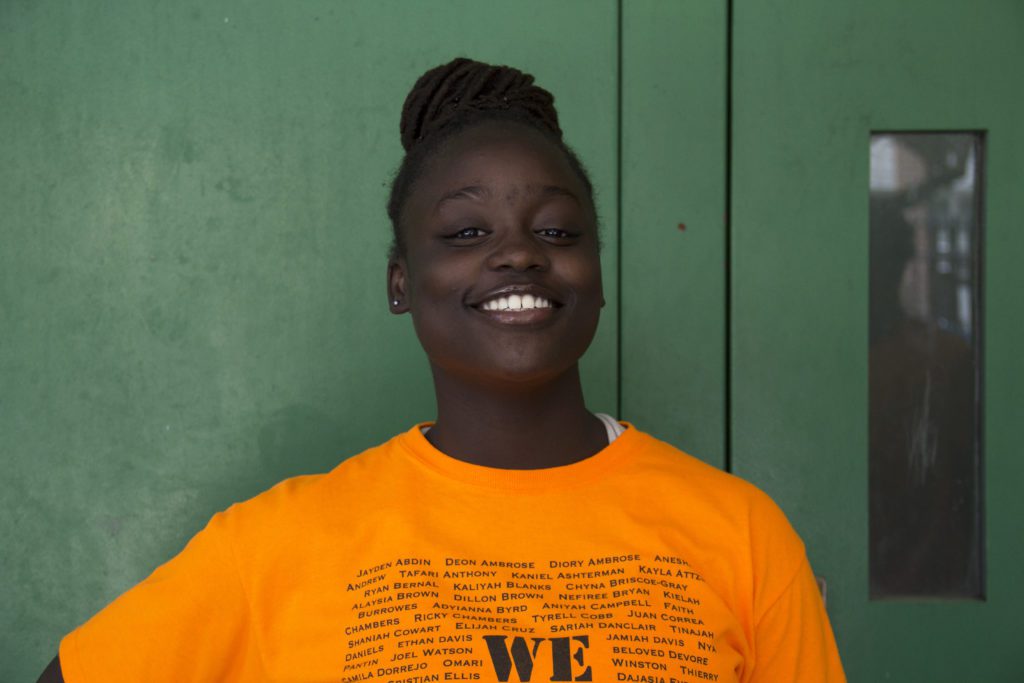 Viviana Lima, 13, is a student at Launch. For her, the anti-gun violence unit was particularly emotional. “My cousin died last year. They shot him. He was trying to block the bullet and he died.” But, Lima says, it felt good to march with other students to try and end the violence that took her cousin’s life. Image: Sayre Quevedo/Youth Radio 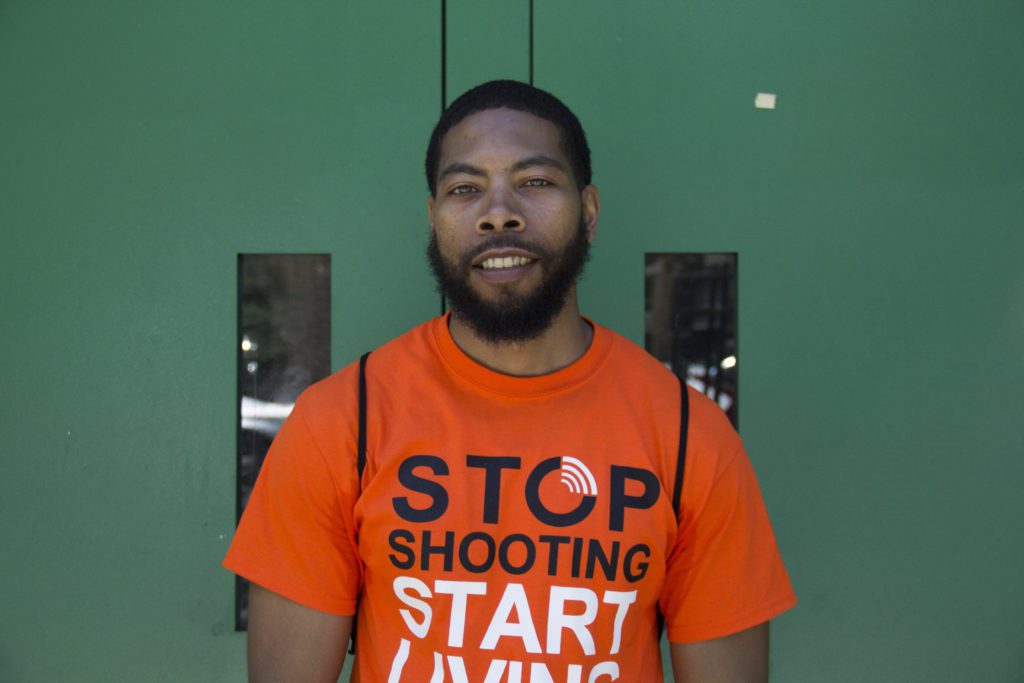 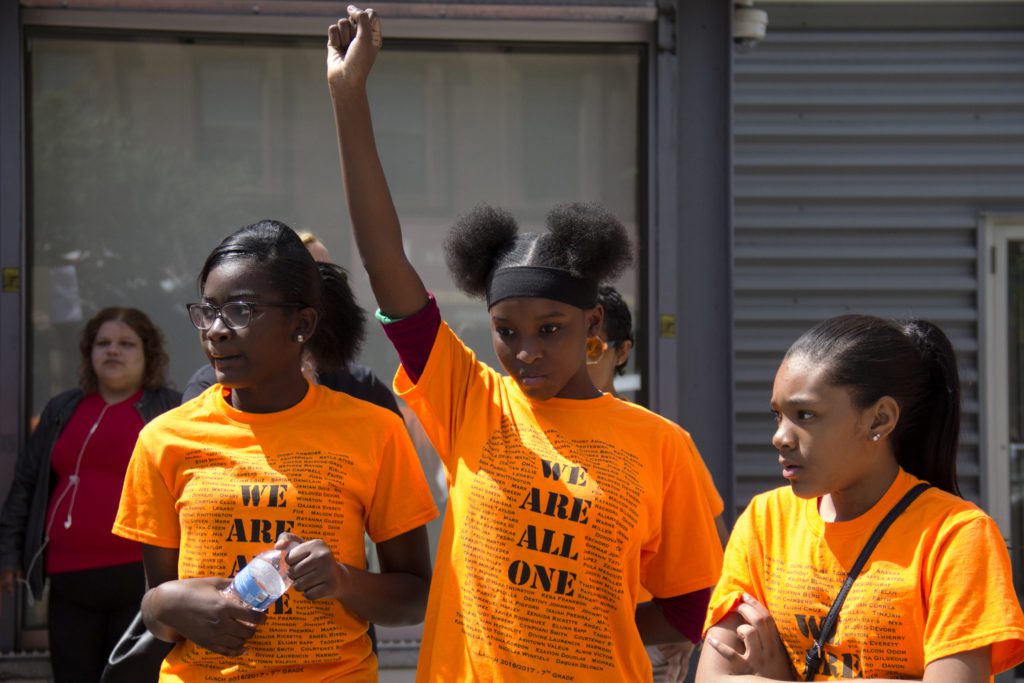 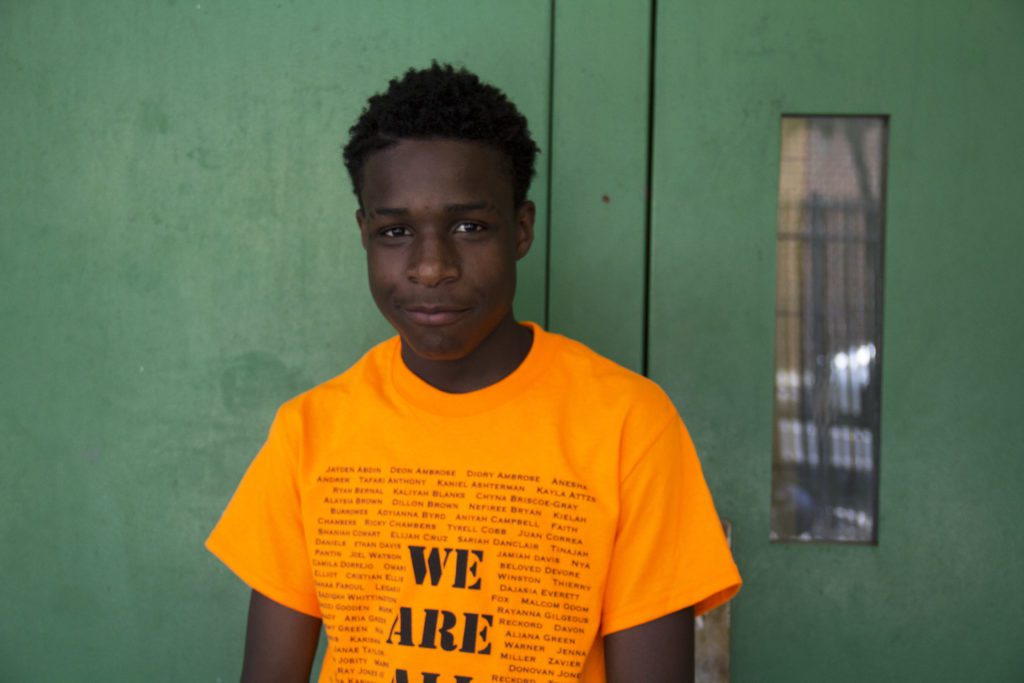 Ashtown Valews, 14, a student at Launch, has also experienced gun violence. He has family members who have been shot–some who lived and others who didn’t. He says he’ll continue to spread the message of the class, even after it’s finished. Image: Sayre Quevedo/Youth Radio 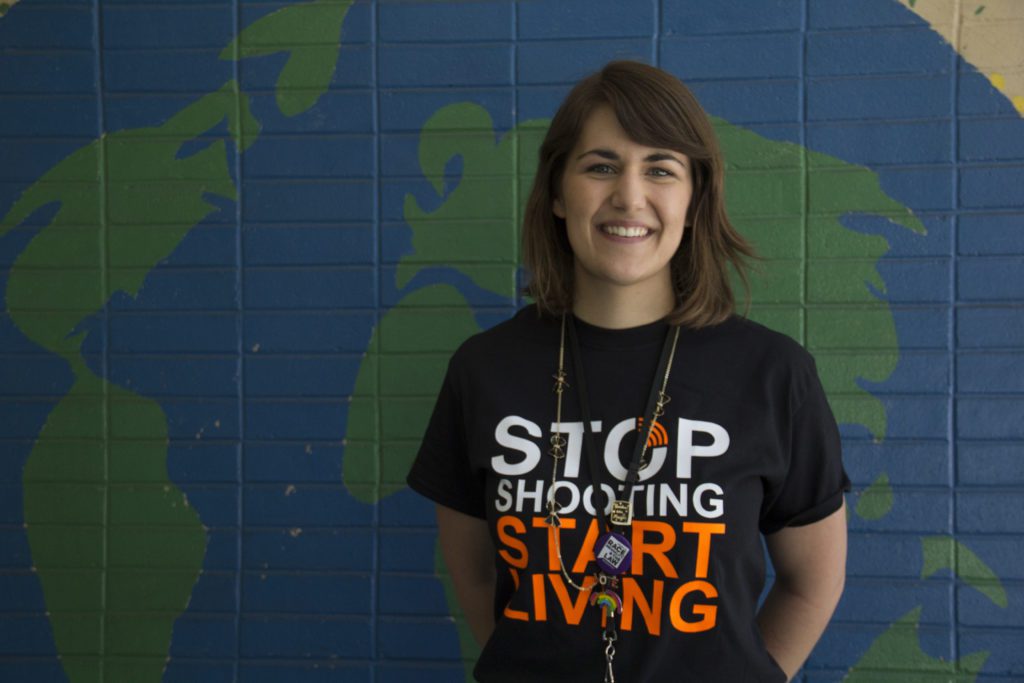 Lindsay Herz is a Special Educator at Launch, teaching science and social studies for seventh graders. Along with co-teacher, Shamikah Kenlock, Herz helped with organizing and logistics for the rally. “It was really the students who did the most important planning in preparing for this. Many of them were speakers at the event. They led the march. They were chant leaders. They designed the signs. Every single student at the event today had a role.” Image: Sayre Quevedo/Youth Radio 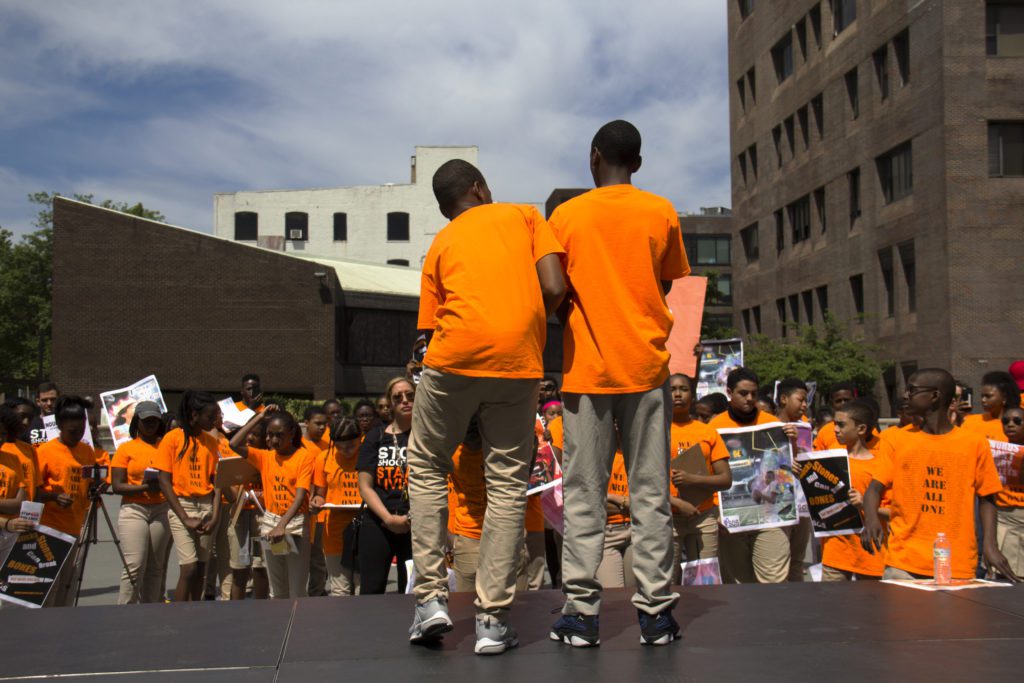 Two students stand on the stage of Restoration Plaza Amphitheater in Crown Heights. One delivers his “call to action,” an essay on how to solve the problem of gun violence. He wrote the essay as a part of his social studies class. Image: Sayre Quevedo/Youth Radio