Donate Now
Noel Anaya was separated from his birth mother after he entered the foster care system. He re-met his birth mother at age 14 after a ten-year hiatus. In preparation for that visit, he wrote this letter to give her. Photo courtesy of Noel Anaya.
07.26.18 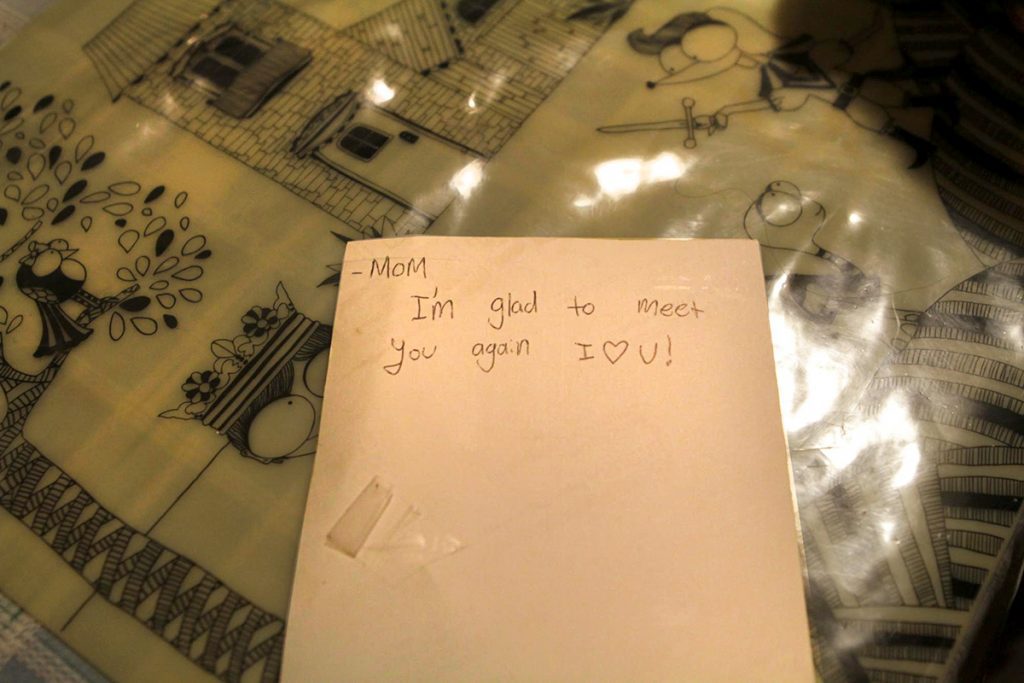 Noel Anaya was separated from his birth mother after he entered the foster care system. He re-met his birth mother at age 14 after a ten-year hiatus. In preparation for that visit, he wrote this letter to give her. Photo courtesy of Noel Anaya.

Recently, I watched the video of a 1-year-old representing himself in an immigration court. The kid is young and scared. Seeing his face, my first thought is, Why isn’t this kid getting proper representation in a U.S court?

My second thought is, Damn. Family separation is nothing new. It happened to me too.

I was just over a year old when I was separated from my family. It wasn’t at the border, like the migrants who are in the news right now. But just like many of those kids, I was taken from my family and put into the U.S. foster care system — a system that, I know from personal experience, isn’t great at reunifying families.

The U.S. foster care and immigration systems may seem separate, but migrant kids taken from their parents are considered “unaccompanied minors” and routed through the Office For Refugee Resettlement. From there, many are sent to state-licensed providers, including foster families. That means some of those kids are dealing with the same system that I was a part of for 20 years.

According to the latest government report on the foster care system, only a little more than half of foster kids have a case goal of family reunification. And while the system, at least on paper, doesn’t seem to be too bad at hitting those numbers (in 2016, 51 percent of the kids who left foster care were reunified with their parents or primary caregivers), the real story is more complicated.

It’s not as easy as your parents wanting you back and then the family living together again.

When you’re placed into the foster care system, kids don’t get that much of a say as to whether the goal is to reunify you with your biological parents. In fact, kids in care may not have a lot of information about their family, period. And time is short for parents to attempt to get their kids back.

According to child advocates, the process to terminate parental rights can start as early as four months after a child is placed into foster care. For parents who face language barriers, have fewer resources, or lack documentation, it can be intimidating and challenging to fulfill the requirements ordered by the court. If a kid’s parents are “out of compliance” with the court order, the judge could change their case goal from reunification to adoption or another form of permanency.

The internal confusion surrounding what I continue to call the “gray hands” of a chaotic system, is only made worse when parents have already been deported. Combine the foster care system with the immigration system, and the chances of family reunification plummet even lower.

The problems with the foster care system are not new, but the recent family separations have finally put them into the spotlight. Despite the end of The Trump Administration’s “Zero Tolerance Policy,” hundreds of parents and children remain separated — some because the government has decided that reunification is not a proper goal, on the basis of parents’ backgrounds or circumstances.

Again, no one is asking these kids what they want. At best, in the eyes of the government, they are wards of the state. At worst, they are seen as criminals.

As a child being raised in the system that’s supposed to be temporary, I always dreamed of finding a family that would love me. Instead, I spent two decades in foster care, eventually aging out.

It wasn’t until earlier this year, when I talked to my birth mom about what happened, that she told me my birth family had been trying to find a way to talk to me throughout my childhood.

She told me I came close to being reunified with my relatives, but factors like immigration status complicated things (I am an American citizen, but that’s not the case for some of my family members). Language barriers made it hard for my birth family to navigate the bureaucracy of the system, which required things like classes and keeping appointments with social workers and attorneys. I also talked to my mom about why she thinks we were never reunified, and she said she never had proper help. Over time, she was allowed to see me less and less.

One day, when I was three or four, she said they called her to say she had a six-hour visit with me — and that it would be our last. She says I held onto her leg and didn’t want to let go of her at the end.

I don’t remember that meeting. I wouldn’t see her again for 10 years.

I get that families aren’t perfect, creating situations where reunification sometimes isn’t a possibility, for safety or other concerns. But at least in my experience, I wish I had had more say in what the system determined was best for me.

Today is the deadline to reunite migrant parents with the older children who were taken from them at the border, so I expect my social feed will soon be full of happy family reunification videos. But I’ll be thinking of the kids who remain in the system — with case plans not fully in their control.