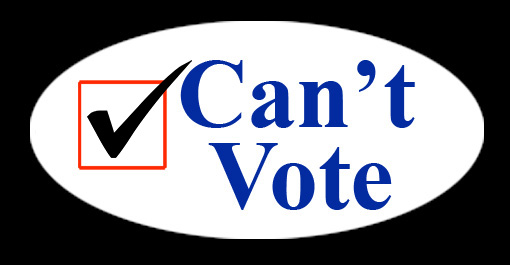 I’m a 17-year-old who lives and breathes politics. I can’t get enough of it. And I’ve thought about the upcoming election a lot. But as a minor, I can’t vote.

Last year I got my first paycheck and I looked at where my money went: Federal Income Tax, Social Security, Medicare. And I realized something. I pay into the government, but I don’t get a say in how it works.

The main argument I’ve heard against allowing young people to vote, is that we won’t take the decision seriously. But I’m a civically engaged citizen. It’s more than taxes. I abide by laws, I attend public school. I volunteer. I’m even in a program called Youth & Government.

But because I, an informed American with an opinion, am under 18, I can’t vote. Instead that privilege has been given to people who are apathetic about politics.

This presidential election is the first one I’ll remember. I’m old enough to understand what’s going on, but I’m two months too young to participate. When the election does come around, I’ll be watching the poll numbers, hoping my candidate wins.