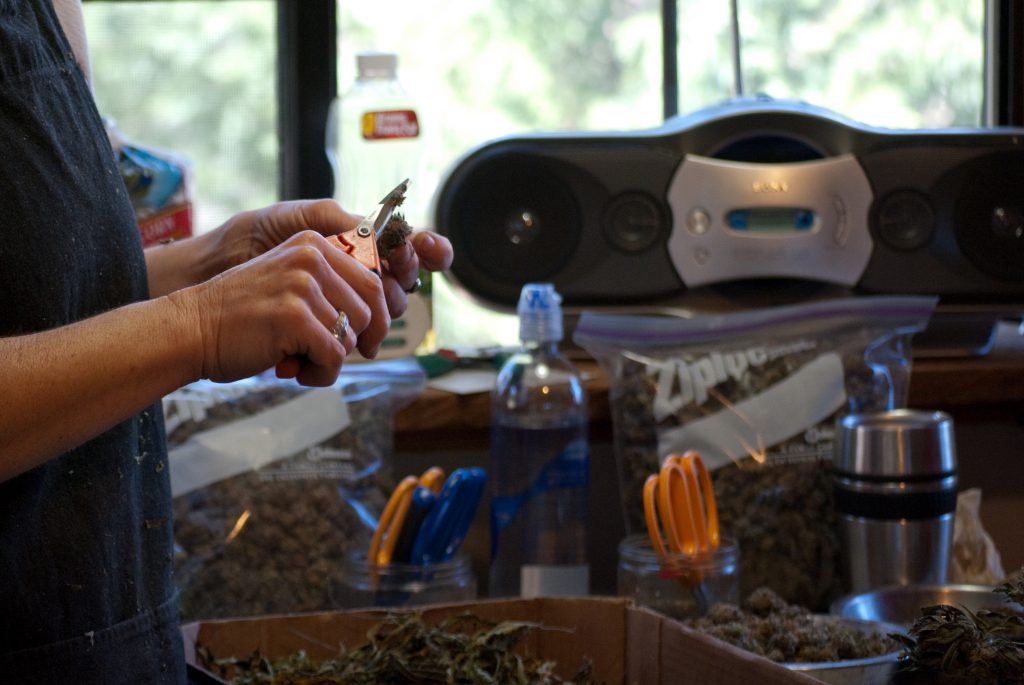 Humboldt County sits along the California coast about 200 miles north of San Francisco. It’s not just known for fog and giant redwoods. Humboldt is to weed what Napa County is to fine wine; the region is the epicenter for marijuana production in the U.S..

Every fall, young people — mostly in their 20’s — come from all over the world to work the marijuana harvest. The job they come for is “trimming”; getting the buds ready for market. The locals have a name for these young migrant workers: “trimmigrants”.

To understand this story, you need to know what trimming is. Marijuana grows like a huge bush and the flower it produces is the marijuana bud. Trimmers manicure the buds, snipping off the leaves and stems and then shaping them with their scissors.

The idea is to make the weed stand out, so it sells well at medical marijuana dispensaries.

Garberville, a tiny town of about 900 residents in Humboldt, swarms with trimmigrants during the season. Girls and guys, mostly in their 20s with big bulky backpacks and pitbulls. Many of them look like modern day hobos.

At the far end of town, I met Fermin, a 24-year-old artist from Tennessee. Like all the trimmers I spoke with, Fermin would use only his first name. Trimming for an illegal operation could make him an accessory to a drug crime.

“I heard you could get work pretty easy and you can get a pretty good amount I guess. So that was it really,” said Fermin. “The reality is that it’s taking a little bit longer than I expected.”

Fermin has been here for about a month and hasn’t found any work yet. It’s getting colder and the rains are coming. He sleeps in the woods just outside of town and dumpster dives for food. Until he finds a job trimming weed, he gets by on selling his art and playing music on the street.

It’s estimated that there are well over a hundred thousand marijuana plants growing in the hills around Humboldt, and they all need to be harvested around the same time and processed quickly to avoid mold and other problems. So from September through November, it’s all hands on deck. That’s where trimmigrants, also called scissor drifters, come in.

Trimmers are paid by the pound. And fast trimmers can make $300-$500 a day. In cash, under the table; but of course if the place where you’re trimming gets busted, it could also land you in jail.

Some trimmigrants, like Fermin, give the impression they’re here to work. But the scene is also attracting drifters who hang around looking pretty drugged out. Locals say European youth often get hired over Americans who get stereotyped as hippy kids.

Kristin Nevedal says migrant trimmers are everywhere, obstructing local businesses, and damaging the river with their squatter camps. Nevedal is a local resident and co-founder of the Emerald Growers Association, a group of 400 marijuana farmers all over California.

“This is not the fun vacation thing to do, right? To like show up in Garberville in the fall and see if you can get a job,” said Nevedal. “We cannot house these people, we don’t have any facilities for them. Like, don’t come unless you have a job.”

According to the county sheriffs the majority of growers in Humboldt are operating illegally. So hiring strangers from the side of the road puts the growers at risk.

There is risk for trimmers too. Every year some go missing and trimmers have even been killed. They often work in remote areas with no cell phone service or running water, sleeping in tents. Sometimes they don’t even know where they are.

Tim Blake has been growing marijuana since the 70’s. His collective, Healing Harvest Farms, is just south, in Mendocino County. Blake’s is a small farm and it’s legal. He grows 25 plants, which is the county limit for medicinal marijuana, but the plants are huge.

“Look at the different colors,” Blake said as he showed off his plants, “you got the purples, then you got the dark greens, the light greens.”

Blake’s marijuana plants look almost like small trees. They’re ten feet high and he says each one will produce about 8 pounds of weed.

“As soon as you squeeze it,” Blake said, handling a plant, “you can feel the resin on it. It gets right on your fingers. It gets all over it.”

Blake brought me to the trimming room where six people, most in their 20s, are sitting and snipping away. Out of concern that a stranger could steal his entire harvest which is worth almost a quarter million dollars. Blake only hires trimmers he knows.

Bishma is a local who does catering work that mostly supports his wife and two kids. But during the fall harvest, he lives full time on the farm.

“Some people think I sit eight hours at a job,” said Bishma, “(but) it’s like we’re sitting here 14 hours. And it’s the same repetitive motion over and over and over again so people just go to town and listen to every kind of music they can.”

“As far as radio goes around here, there’s country music, latino music, and NPR,” said Bishma. “So for most of us it’s NPR.”

Lots of locals depend on marijuana for part of their livelihood. For young people who manage to get into the trimmigrant workforce, it’s a job so lucrative that some can make all of their money for the year during the three month harvest. But as laws around the country change — making marijuana legal — analysts say the pay scale is bound to go down, making trimming more like any other low-paid farm work.

And like farm work across the country–marijuana production is already becoming mechanized, gradually making trimmigrants a thing of the past.