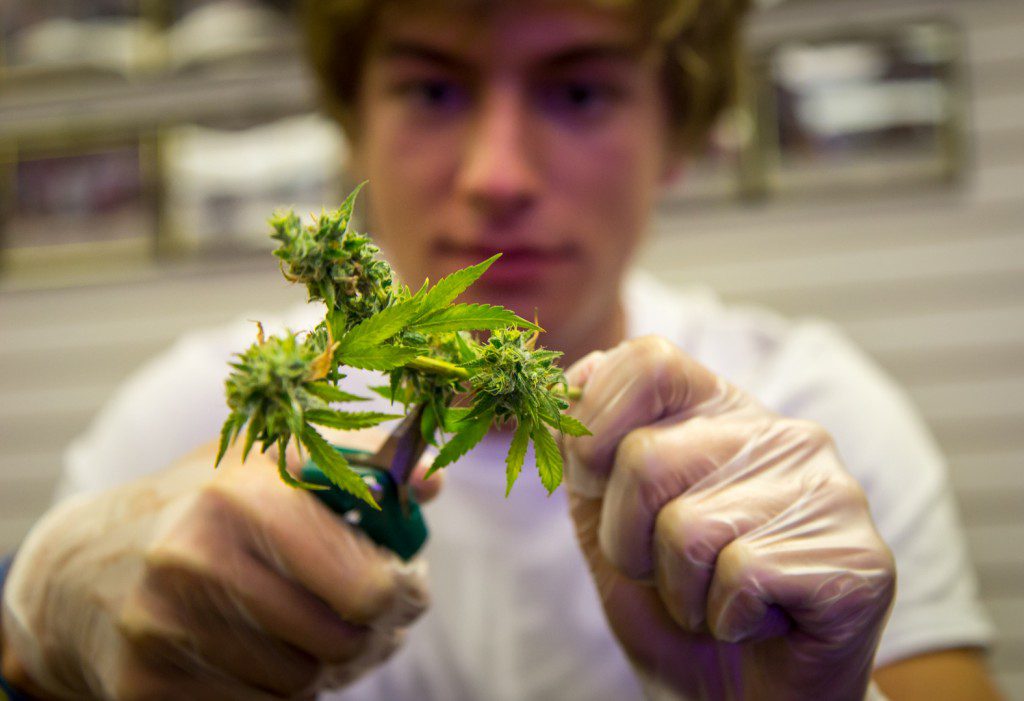 On a Thursday in October, I arrived just in time for the morning lecture at Oaksterdam University in Oakland, California.  There were 23 students, mostly guys, with their pens and notebooks out, waiting eagerly for their professor Jeff Jones to begin his lecture. Jones has been in the marijuana industry for over 20 years. As he started to talk about “carbohydrates” and “magnesium sulfite” I felt myself getting completely lost.

This is the Harvard of marijuana studies. From the growing, to harvesting, to the dispensaries, marijuana has become a multi-billion dollar industry in California. It’s being called the state’s green rush. And these Oaksterdam students are serious — far more engaged than I remember my classmates in college being. They don’t stop taking notes throughout the two hour lecture. Then they delve into two more hours of lab work where they learn how to manicure the buds for medical marijuana dispensaries. They work in pairs, using customized scissors, inspecting for mold or discoloration, and cutting away leaves and stems. They do this for the same reason that you or I choose one apple over another at the grocery store — because it looks better.

It’s 21-year-old Derek Stephanoff’s first semester at Oaksterdam. Before this, he studied aviation technology, but left when he found out about the mandatory drug testing. “If I were to smoke  a joint, and take the test once and fail,” he told me, “they revoke my license and I can never get my license back to work in the field. So I’m blackballed in the industry, which is what would have happened if I continued going to school for that.”  Now he’s near the top of his class here at Oaksterdam. Stephanoff wants to be on the advocacy side, pushing for legalization, and maybe own a dispensary.

We talked to students from Florida, New York, Michigan, Massachusetts, New Mexico and as far away as France. Lots of them have college degrees already, but say it wasn’t getting them very far. When they graduate from Oaksterdam, these students are hoping to be the employers in this industry. So today’s lesson about trimming weed — is kind of an eye roll. It’s menial; there’s money in trimming, but it’s not glamorous.They’re aiming to be the suits of the marijuana industry.

But there’s plenty of young people working in this industry that aren’t necessarily interested in moving up. To meet them, I drove 200 miles north, to Humboldt County, the epicenter of the nation’s marijuana production dubbed “The Emerald Triangle.” It’s to weed what Napa County is to fine wine. Because it is estimated that there are over $100,000 marijuana plants growing in the hills around Humboldt, young people come here from all over the world looking for a job to trim weed during the harvest season. And it’s good money: fast trimmers can make $300 – $500 a day, in cash, under the table. So many people swarm the area from September through December that the locals have taken to calling these seasonal workers “trimmigrants.”

Garberville is a tiny town in southern Humboldt; it’s less than 3 square miles. Right away, I spotted the twenty or so young people scattered up and down the main street. They were sitting on curbs and leaning against storefronts, many wearing big bulky backpacks. Some had dogs.

I tried my luck with a group of five guys kicking it outside of a grocery store parking lot. They were in their late teens, partially blocking the sidewalk.  When I asked them if they trim, one told me he was was too high on acid to talk to me. The trimming scene attracts drifters who hang around looking pretty drugged out.

At the far end of town, I met Fermin, a 24-year-old artist from Tennessee. He told me he heard it was easy to find trim work here, but “the reality is that it’s taking a little bit longer than I expected.” A month, so far, with no luck, he said. It was getting colder and the rains were approaching, and Fermin said he was running out of money, sleeping in the woods just outside of town and dumpster diving for food.  Until he found a job trimming, Fermin planned to make money by selling his art and playing music on the street.

There was work trimming weed here, but most of it does not go to outsiders. Because there are both state and federal restrictions on how much weed can be grown in California, marijuana farmers prefer to hire people they know and trust: locals.  And the locals were getting frustrated with the trimmigrants. One of these locals was Kristin Nevedal, the co-founder of the Emerald Growers Association, a group of a group of 400 marijuana farmers all over the state. “This is not the fun vacation thing to do — to show up in Garberville in the fall  and see if you can get a job,” she told me. Sleepy towns like Garberville don’t have homeless shelters or public restrooms to serve the transient community. “Don’t come unless you have a job,” she said.

Tim Blake is a marijuana farmer just south of Garberville in Mendocino County. He has been growing marijuana since the 1970’s and runs a collective called Healing Harvest Farms, where he only hires people he knows. He took me up a dirt road in his four wheel drive pickup truck. My producer bounced in the back with Blake’s huge bull mastiff that whined as we made our way up over a hill and down into a sunny valley.

Blake’s marijuana plants looked almost like small trees. They were 10 feet high, 15 feet across, and he says each one will produce about 8 pounds of weed. He had 25 plants, which is the legal limit in Mendocino County.  “As soon as you squeeze it, it gets right in your fingers. Gets all the resin on it. You can feel it all over,” he said excitedly. “Okay that’s the number on desired strain in America right now, in our United States of America, is OG Kush.”

Next, Blake took me to meet his trimmers. Most of them were under 30. Nayelly was one of two European trimmers in the group. She was also one of the fastest.  “The work is beautiful, you know, to work with plants, and stay here, and meet people and share stories,  it’s amazing, but…you go crazy after one month,” she said.

Trimmers sometimes work 14 hour days, “working the same repetitive motion over and over,” said 28-year-old Bishma, who does catering work in his other life. But during the fall harvest his lives here.

For illegal grows, trimmers often work in remote areas with no cell phone service or running water. They sleep in tents and sometimes they don’t know where they are. But for Blake’s trimmers, it was more like summer camp. They bunked together, shared a box of fruits and veggies, and were brought unpasteurized almond milk every morning, made fresh by their boss.

Trimming marijuana doesn’t look like other farm work. Anthropology professor Fred Krissman at Humboldt State University, who studies issues related to immigrant farm workers, calls it an “ag-anomaly” because most of the laborers are white US citizens, meaning that the largest illegal crop in America is the only one using legal workers.

Lumber and fishing imploded years ago and now cannabis is estimated to be the largest private industry in Humboldt County. Weed was everywhere her and even the sheriff’s compared it to prohibition.

In Lieutenant Steve Knight’s office at the Humboldt County Sheriff’s Department, it smelled like weed. Knight said he confiscates so much weed, that his wife had to wash his uniforms separately because his kids were going to school smelling like marijuana. The sheriffs bust 90-100 marijuana operations a year, which they admit, is a drop in the bucket.

Sergeant Bryan Quenell sat at his computer for six weeks counting the marijuana grows in Humboldt County. He shows me the Google Earth imagery of the county, which is covered in red and yellow thumbtack icons. “The yellow pins indicate marijuana grows that I identified,” he told me. “There are so many of them that they just blend together.”

Sergeant Quenell found over 4000 marijuana operations in a county where just two officers are assigned to deal with the problem. He zoomed in on one of the pins to show me what a grow site looks like from the air.

“This is national forest land. All of these little green dots right here. All of those are marijuana plants,” he said as he pointed to them on the computer screen. “And this grow runs from the top of this ridge, down this valley, all the way down to here.”

They didn’t catch the growers, but they did seize 28,000 plants when they busted this grow site. This is just one of thousands of sites and the Sheriffs Department says it can’t keep up.

In the 80’s and 90’s, Sheriff Mike Downey  jumped out of helicopters,  busting marijuana grows in the war on drugs. But today he said “ it almost seems as though legalization is the best and most legitimate answer at this point because it is truly, in Humboldt County and many of the northern California counties, out of control.”

The Future of Trimming

Lots of locals depend on marijuana for part of their livelihood. For young people who came here from all over to trim, it was a job so lucrative that some made all of their money for the year during the 3 month harvest. That’s the dream.

Back in Garberville, 24 year-old Fermin was headed to the woods to string his hammock up for the night. He told me, “I feel like I should have done this years ago, and had connections already. As a newcomer, it’s hard to find work.”Fermin had picked figs in California’s Central Valley, a backbreaking job that he said wasn’t worth the money. As laws around marijuana change throughout the country, making marijuana legal, analysts said the pay scale is bound to go down. Trimming will start to look a lot like picking. Just another low wage farm job.

*This story was modified to add an attribution identifying the Humboldt State Anthropology professor.