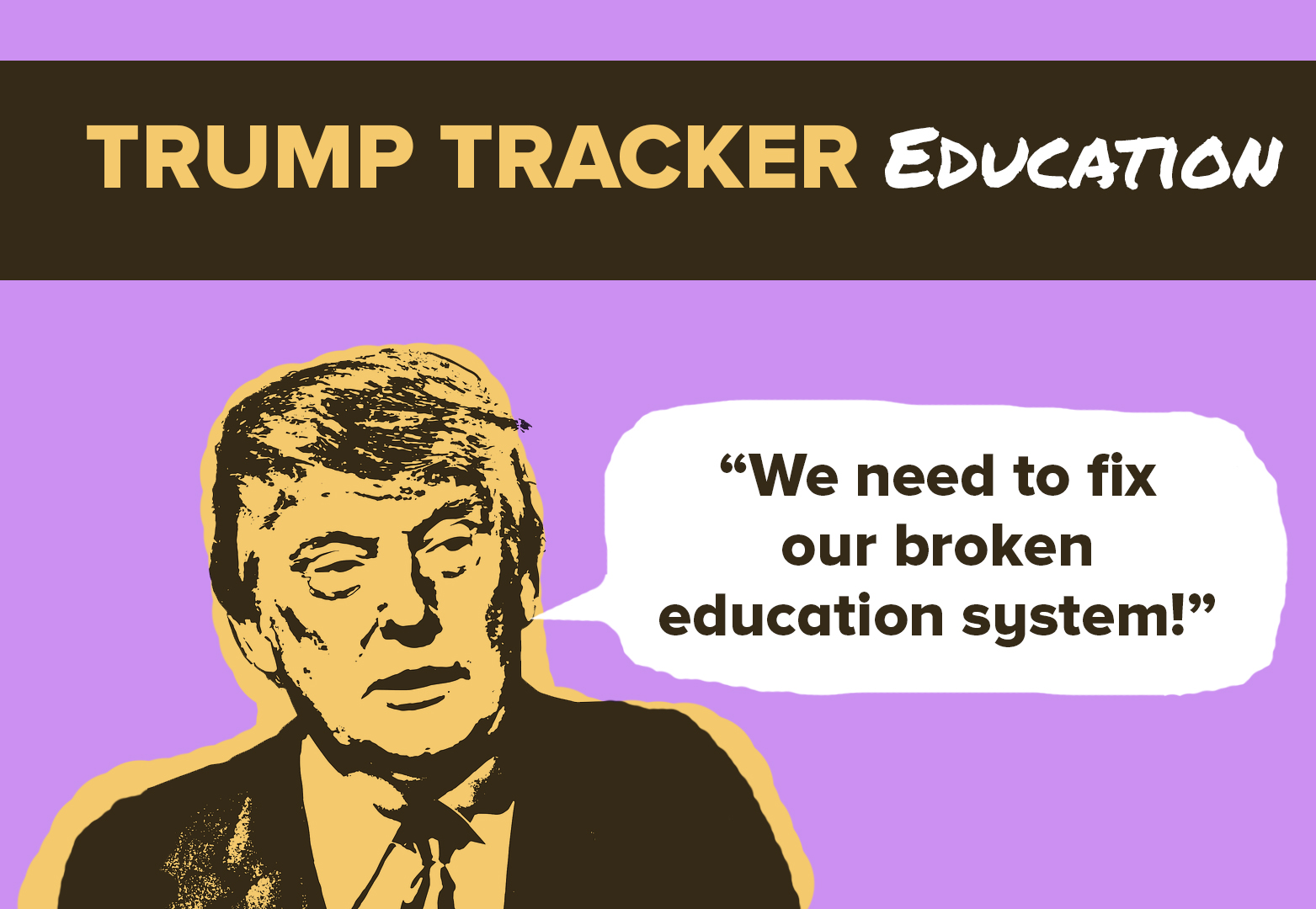 Altering the educational landscape of America is a key part of the agenda of President Donald J. Trump and his Republican allies in Congress. The President’s proposed budget calls for cuts to overall education funding, while increasing funds for voucher programs. These programs would put public funds into the hands of private institutions, something that teachers’ unions and organizations  like the National Education Association oppose.

The new Secretary of Education, Betsy DeVos, was a controversial choice, in part because of her strong support for school voucher programs. DeVos ran a non-profit organization that advocated for school choice programs including vouchers and charter schools. That organization, American Federation for Children, gave its top ranking to a Florida program that provided tax incentives for scholarships to private schools.

That’s a whole lot of terminology at once, so if you’re having trouble tracking who’s who and what’s what—you are not alone.

To really understand what the Trump/DeVos education agenda means diving down into some pretty confusing language. There’s “school choice,” “charter schools,” and “school vouchers” for starters—and they all sound similar but mean subtly different things. Rather than requiring you to go back to school in order to understand what’s up, we’re breaking down some of the concepts in order to keep the big picture in focus.

School Choice – the umbrella term for the issue of charters, vouchers, and other alternatives to basic public schooling. The phrase is used to frame the debate around the idea that parents should have choice in where their children attend school, as opposed to being limited to their local public schools.

School Vouchers – often used loosely as catch-all for a variety of programs that provide financial incentives which can then be used to enroll students in private school. Actual voucher programs grant tuition funds for parents to use at private schools. Alternate visions that get lumped in with vouchers include tax credits, educational savings accounts, and even more elaborate formulas.

Private Schools – educational institutions that are not run by the government. Usually funded by tuition, or through grants and scholarships provided by private parties. Religious organizations run the majority of private schools in the United States.

Public Schools – taxpayer funded institutions overseen by federal, state and locally elected officials. At the minimum open to all eligible students within their residential area.

Schools of Choice – public schools that are open to students outside the traditional borders of their residential area.

Magnet Schools – public schools with special focuses (e.g. science, performing arts) that draw on students from throughout a school district.

Charter Schools – while charters receive public funding, they are run outside the local public school system and can be privately owned. Laws vary from state to state.

What’s the big difference between charter schools and private schools?

While charter schools can either be nonprofit or for-profit ventures (just like private schools), the big difference is in the degree of accountability to local and state school boards, who answer to voters. Regulators have more say in whether or not a charter school can stay open in an area than they do with private schools.

Some are, and there are educational activists who have a problem with public tax dollars being used to make a profit education. The National Alliance for Public Charter Schools claims that just 13% of public charters are run for-profit.

What is the difference between charter schools and school vouchers?

This is a bit of apples to oranges. In a school voucher program, parents get some kind of credit that they are able to use to send their kids to the school of their choice: public, private, charter, etc. This may only cover part of the cost, depending on how the system is set up and the cost of the education. Charter schools offer a degree of choice within a public school system–charters are free for public school students if they are selected–but if a parent wanted to send their kid to a private school they’d be on their own.

Where does the money for vouchers come from?

While the details can vary, the basic idea is that the money allocated for a student in public school would be reallocated via the voucher. This can impact how much public schools can have to spend on fixed costs (e.g. building maintenance, administration).

What do advocates say about school choice programs?

The main argument for school choice is that parents should have the final say in how the education of their children proceeds. The arguments go all the way up to how tax money spent on that education should be allocated. Advocates of voucher programs and charter schools like to claim these programs produce better results because they are motivated by market forces. Actual tracking data, however, doesn’t alway back those claims up.

What do critics say about school choice programs?

The major complaint is that by diverting tax money out of public schools—in order to pay for students in private/charter institutions—the overall funds for public schools will shrink. Thus weakening public schools, and driving more students out of the system.  Meanwhile the private/charter institutions aren’t held to the same standards, so there is no way of making sure that anyone is getting a decent education, let alone a great one. This flies in the face of the original purpose of government funding of schools: the guarantee that every American would have access to an education.

Is this basically a fight over whether it’s ethical to make a profit on education?

Wow. You’re smart. Where’d you go to school? That’s not all that is going on, but it is part of the equation.

The following statistics were largely drawn from the National Center for Education Statistics’ 2016 “The Condition of Education” report with data from the 2013-2014 school year, unless otherwise noted. They provide a snapshot of the number of students whose lives are impacted by these debates.

According to the Council for American Private Education, private schools make up 25% of all schools in the United States. In other words, a quarter of the schools in the U.S. serve 10% of the student population.

EdChoice’s Fast Facts hub also contains information on Educational Savings Accounts, Tax-Credit Scholarships, Individual Tax Credits, and Individual Tax Deductions, all of which are used in various states to offset the tax burden of those who send their children to private institutions.

While the details of the debate can vary from county to county and state to state, the policy that will be set in Washington in the coming months is bound to encompass arguments about all of these issues and more. The final shape of the Trump/DeVos educational policy has a good chance of being like nothing we’ve seen before at a national scale.

Before it can be implemented, however, students across the country are going to have a ringside seat for the fiercest fight over the direction of schools in decades.