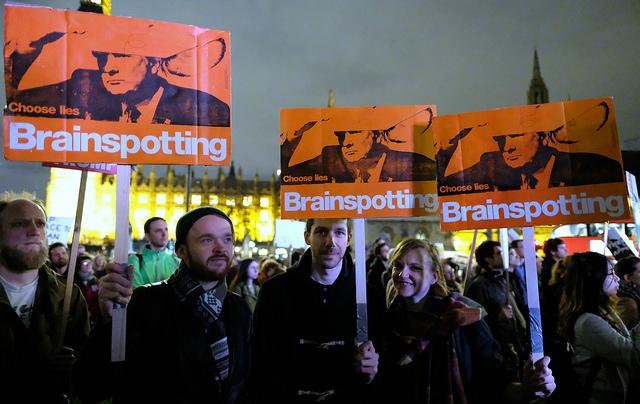 Anti-Trump protests are not only becoming a common, domestic occurrence but have now seemingly become a commonality abroad.

President Donald Trump arrived in the United Kingdom Thursday for a diplomatic visit in which he’s set to meet with Prime Minister Theresa May and  Queen Elizabeth II to name a few. And although the U.S. and U.K. are considered strong, close allies, Trump was not exactly welcomed with open arms by British citizens. In fact, the greeting was quite the opposite.

In the weeks leading up to the president’s visit, many activists had been preparing by organizing protests in both the virtual and physical realms. Some even went beyond the typical make-a-picket-sign-and-gather method of protesting. Here are some ways the Brits are voicing their dissent.

1. Getting a 14-year-old song back on the charts

A grassroots Twitter campaign has put “American Idiot,” a 2004 punk classic by Green Day, back on the British charts in preparation for Trump’s arrival. Although the song is over a decade old, it’s currently reached No. 18 on the charts and is first on British Amazon’s bestseller list.

The bid to resurrect the song seems to have begun on Twitter, by an account appropriately named “American Idiot For UK No. 1 When Trump Visits.”

My fellow Brits… we have a job to do

The song was released before the 2004 election and originally written about President George W. Bush and his administration’s decision to rush into the Iraq War, but the Brits seem to have decided to revive the song for this special occasion.

After reports of Trump’s team making plans and preparations for him to avoid some of the protests scheduled, like taking a helicopter between destinations and the security detail setting up metal barriers and fences around the U.S. Ambassador’s residence, an elementary idea was hatched.

According to CNN, some are planning to put together an “all night noise protest” at the ambassador’s residence at Winfield House in Regents Park, which is where the president will be staying in London. Protestors are encouraged to bring “pots, drums, and vuvuzelas.” The latter noise-maker may find a new purpose now that England is out of the World Cup.

This is not a typo. A balloon depicting the president as a diapered, orange baby has been approved by London’s mayor, Sadiq Khan, to fly over the House of Parliament after more than 10,000 people signed a petition. So far, 1,900 people have donated to crowdfunding for the ballon, raising over $40,000. The organizers are hoping to have the blimp meet Trump in other locations throughout his UK trip but is banned from flying over the Scotland golf course where he is expected to play on Saturday. Many are hoping to take the balloon on a world tour, following the president on his other international trips.

Up, up and away.
My beautiful, my beautiful balloon.https://t.co/XH3RVVgrre

Trump was met by hoards of protesters yelling “shame on him” outside Blenheim Palace, one of his first stops and the location where he is set to have dinner with Prime Minister Theresa May.

The protests are set to continue on through the week as the president makes his way through the UK.