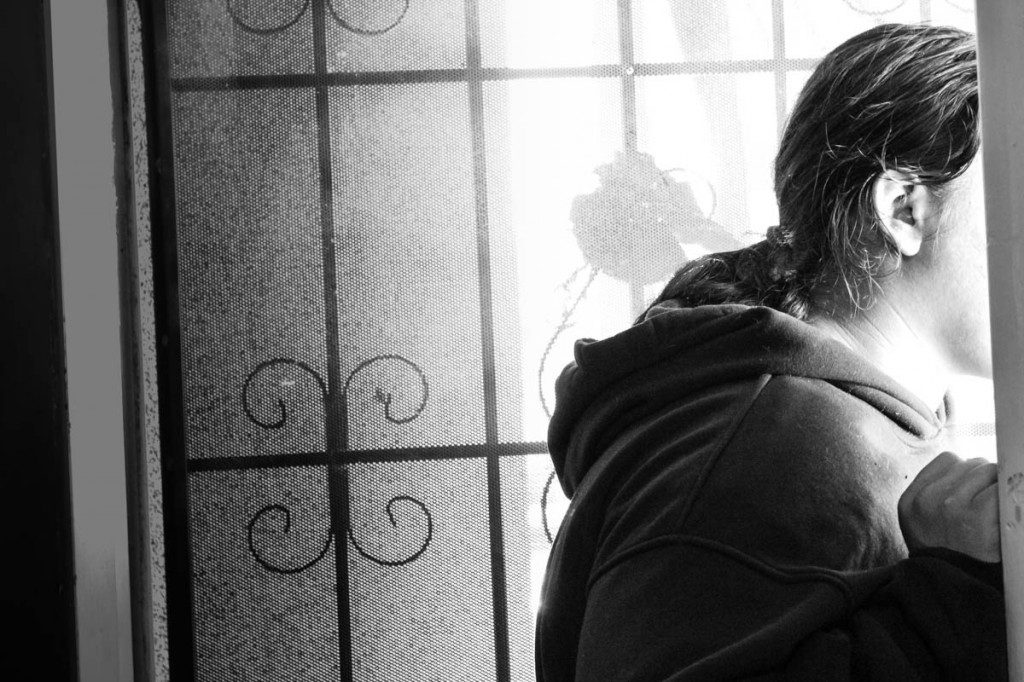 A young man looks out his front door in Alameda County, California, demonstrating how far outside he was allowed to travel while he was on GPS electronic monitoring. He said, “It felt like I was on a dog leash.” Photo: Denise Tejada/Youth Radio

At the Alameda County Juvenile Justice Center in San Leandro California, Assistant Superintendent Brian Hopson led a tour through the huge, 360-bed juvenile detention center. When it opened eight years ago, the place was pretty much full. But on this particular tour, nearly half the beds were empty. Hopson’s footsteps echoed down the hall as he unlocked a door to an unoccupied unit.

“It’s empty. It’s been closed for some time,” Hopson said. “So when we say ‘a closed unit,’ there’s no youth being housed there. The lights are on, but there’s no one in there.” 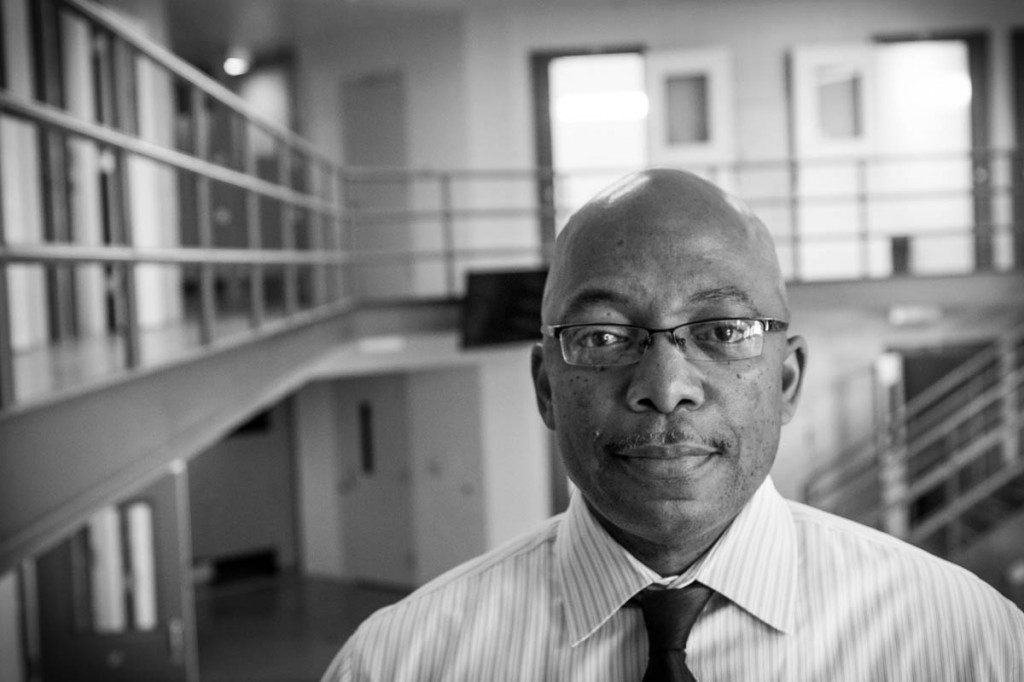 Issues with juvenile justice have made headlines for years, and the move away from locking kids up has been at the forefront of reform efforts. Between 1999 and 2013, the country’s incarcerated juvenile population dropped by half.  Now, instead of using detention centers that remove kids from their homes, judges across the country are ordering young offenders into the probation system as an alternative.

That’s what happened to one 18-year-old I spoke to. I’m not using his name, to protect his privacy. When he was 15 years old, he was arrested for stealing two pairs of sneakers, worth about $85. Gathered with around a table in his living room with his mom and lawyer, he reflected on the details of his case.

“I got in trouble for two pairs of shoes,” he said. “And from there, everything changed.”

This was his second arrest for what the court found to be a minor offense. It was classified as a misdemeanor, but instead of sending him to juvenile hall, a judge put him on juvenile probation, which can last until you are 21. His court orders included nearly two dozen conditions that he had to follow. His attorney, Kate Weisburd, read through the list of rules, which included everything from “attend classes on-time and regularly” to “obey all parents or guardians.”  Breaking any of these rules is considered a technical violation, and can lead to incarceration.

Unlike adult probation, where the primary requirement is not committing a new crime, kids on probation must also demonstrate that they can follow rules set by the court. If they mess up, they can be locked up.

This young person was locked up numerous times, in some cases because he didn’t comply with court-approved limits on where he was allowed to go. He had a GPS electronic tracking device strapped to his ankle. It monitored his movements, limiting him to certain locations, like school or home.

“It made me feel like I was on a dog leash or something,” he said. For some young people, just going into the backyard or onto the front porch can trip the GPS system, and that’s a probation violation. 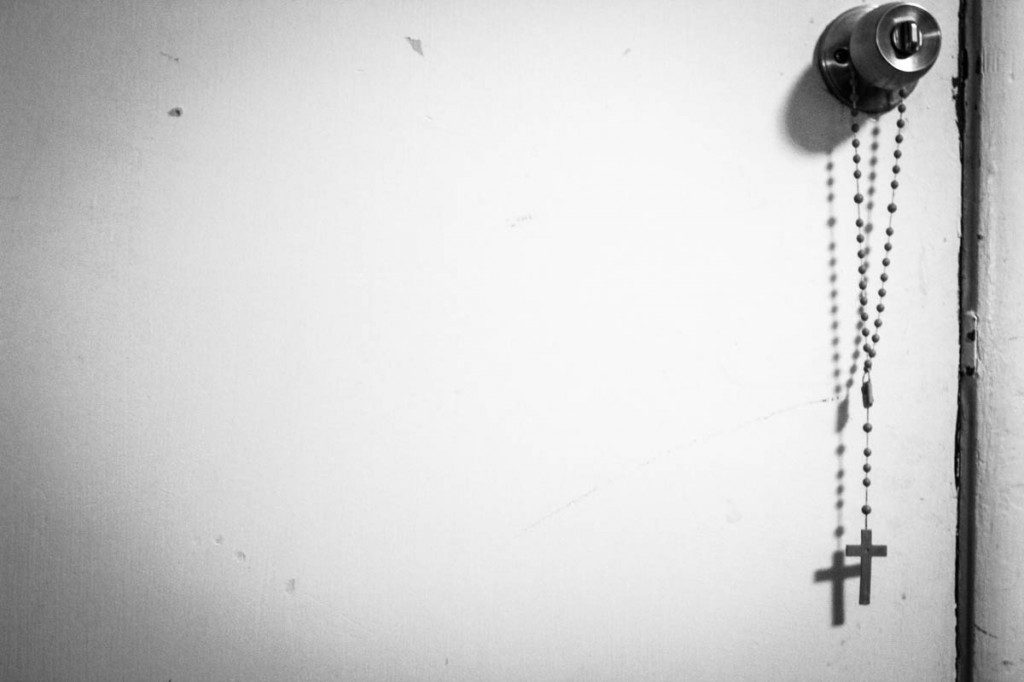 The young man’s mother says her son, a former altar boy, was often unable to get permission to attend attend church with the family while on GPS electronic monitoring. Photo: Denise Tejada/Youth Radio

The teen’s mother says her son, a former altar boy, was often unable to get permission to attend church on Sunday mornings with the family while on electronic monitoring. His mom remembered how worried she was to leave him at home by himself.

“My son, he doesn’t want to eat all day. He wants to only sleep,” she said of that time in her child’s life. “It was really hard. He doesn’t have much hope — esperanza. I feel sad when I see my son like that.”

Almost every state allows some form of electronic monitoring for juvenile defendants. This young person’s lawyer, Kate Weisburd, has seen the downside. She said, “It is ironic that electronic monitoring is seen as an alternative to detention, yet is often what leads our clients to be detained.”

Brent Cardall is the Chief of Probation in Yolo County, California. Last year, probation violations were reported as by far the top reason kids were incarcerated there. But Cardall says some of that is beyond his control. “We’re not the judge and we don’t tell the youth where they go and what they do,” he said. “We enforce the orders of the court…and we have a mandate to report those violations to the court.”

His county is working on reforms to get better outcomes for youth in the system, implementing new programs that support the whole family.

But some people say alternatives to jail often aren’t achieving their original goals.

“Many of the young people, when they first engage with the system, would be considered low-risk, and involvement in the system increases their risk,” said former Chief of Probation for Alameda County, California, David Muhammad. “There is a mountain of research that says when the juvenile justice system touches a young person, that their likelihood of dropping out of school skyrockets, their likelihood of later being involved in the adult criminal justice system skyrockets.”

Juvenile justice is designed to hold young people accountable for their crimes and provide rehabilitation. But Attorney Kate Weisburd said probation can sometimes make things worse. “It is ironic that electronic monitoring is seen as an alternative to detention yet is often what leads our clients to be detained,” she said.

Probation is intended as an alternative to locking kids up, yet in some parts of the country, almost half of incarcerated youth — the majority of them kids of color — are behind bars because of technical violations committed while on probation.