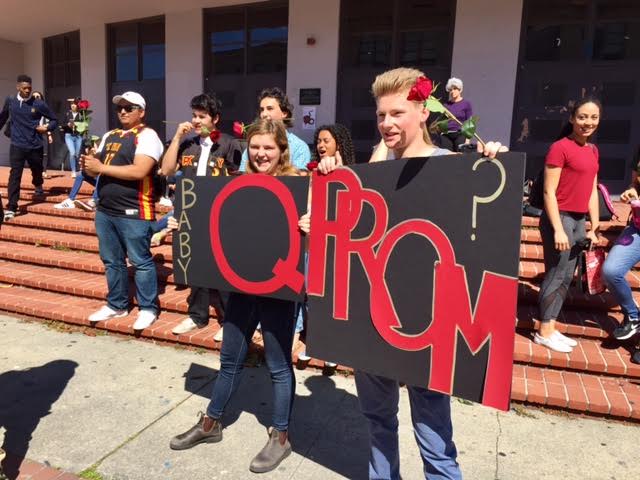 Most days at lunch, more than 3,000 students pour out of Berkeley High School and fan out across downtown to beat the lines for burritos and pizza slices. But during “promposal season”–which dominates springtime on campus–the student body crowds into the main quad, pushing forward to get the best view of the latest romantic spectacle.

I’m a senior at Berkeley High and our Student Leadership Team hosts a competition every year: whoever comes up with the most extravagant promposal will win two free tickets to prom. To qualify, the promposal must happen on campus, either before school, during lunch, or after school. True to the age of social media, a video of the promposal must be submitted to the committee. Pics, or it didn’t happen.

I attended one particular promposal staged by my friend, 18-year-old Angelo Paraiso-Arroyo. He actually asked a professional DJ to blast his prospective prom date’s favorite song–“I Like Tuh” by Carnage–across our high school courtyard. I would estimate more than one thousand kids gathered to watch this display.

Angelo stood at the base of the school steps, holding a teddy bear, as Maxine Bartu–the girl he was asking to prom–proceeded down the walkway. She was flanked by a mob of students, many of whom had their phones out, Snapchatting the entire event. When Maxine reached Angelo, the crowd chanted, “Kiss, kiss, kiss!”

In front of the school, Maxine and Angelo shared a quick peck. Why was the climactic moment–the kiss–so restrained?

Well, for one thing, Maxine and Angelo aren’t even dating. They’re just good friends. She only kissed him to save face in front of a thousand spectators.

“I just felt more bad if I didn’t kiss him,” Maxine told me, after the promposal. “It would kinda be embarrassing him in front of the school.”

And even more deflating–Angelo’s promposal wasn’t a surprise. Maxine and Angelo had already agreed to go to prom together weeks before. So going into his promposal, Angelo didn’t feel anxious, because he already knew Maxine would say yes.

As Angelo prepared for the big day, he told me, “It’s just exciting… like I’m actually doing one of these.” Meaning, Angelo was excited to orchestrate his promposal, for the sake of getting to participate in this new high school tradition.

Angelo and Maxine’s situation is pretty common. Prom has romantic connotations, but realistically, it is much more common to go to prom with a friend or group of friends than with someone you’re dating. I only know of a few people in my grade involved in serious relationships, and in senior year, everyone’s mind is too far off in college or other post-graduation plans to be caught up in the dating scene. So there’s something kind of weird about all this public romantic hoopla between friends, right?

“We have a really good friendship,” Angelo told me. “I think we’re gonna have a lot more fun than some people, because we click very very well.” As friends.

Of course, the crowd watching Angelo’s promposal doesn’t know the backstory: that Maxine and Angelo have a platonic friendship, that they had previously agreed to go to prom together, that the show they were putting on was just that–a performance. After all, Angelo brought out roses, candy, music, and an oversized teddy bear–a bunch of cartoonish symbols of love. Who can blame the crowd for chanting, “Kiss, kiss, kiss”?

“I didn’t really like the fact that I had that pressure to kiss him,” Maxine said, even though she bowed to the pressure.

Promposals are descended from their adult counterparts: the wedding proposal. But within the pressure cooker of high school, and aided by tools of social media, promposals at my school have become an arms race, as students continue to find grander and more elaborate ways to one-up each other. I’ve seen red carpets, sprinkled rose petals, and choreographed dances from the cheerleading squad.

Of course, the lure of potentially going viral drives a lot of these stunts. But, oddly enough, the school seems to be signing off on promposals by allowing the Student Leadership Team to put on the promposal competition (and offering the free prom tickets as a reward). Since when are schools in the business of rewarding the most creative ways that students are coupling off?

And perhaps in the end, promposals matter more to the spectators than the participants. As Maxine told me, “If there’s an audience or not, I would have been happy just knowing I had a prom date.”