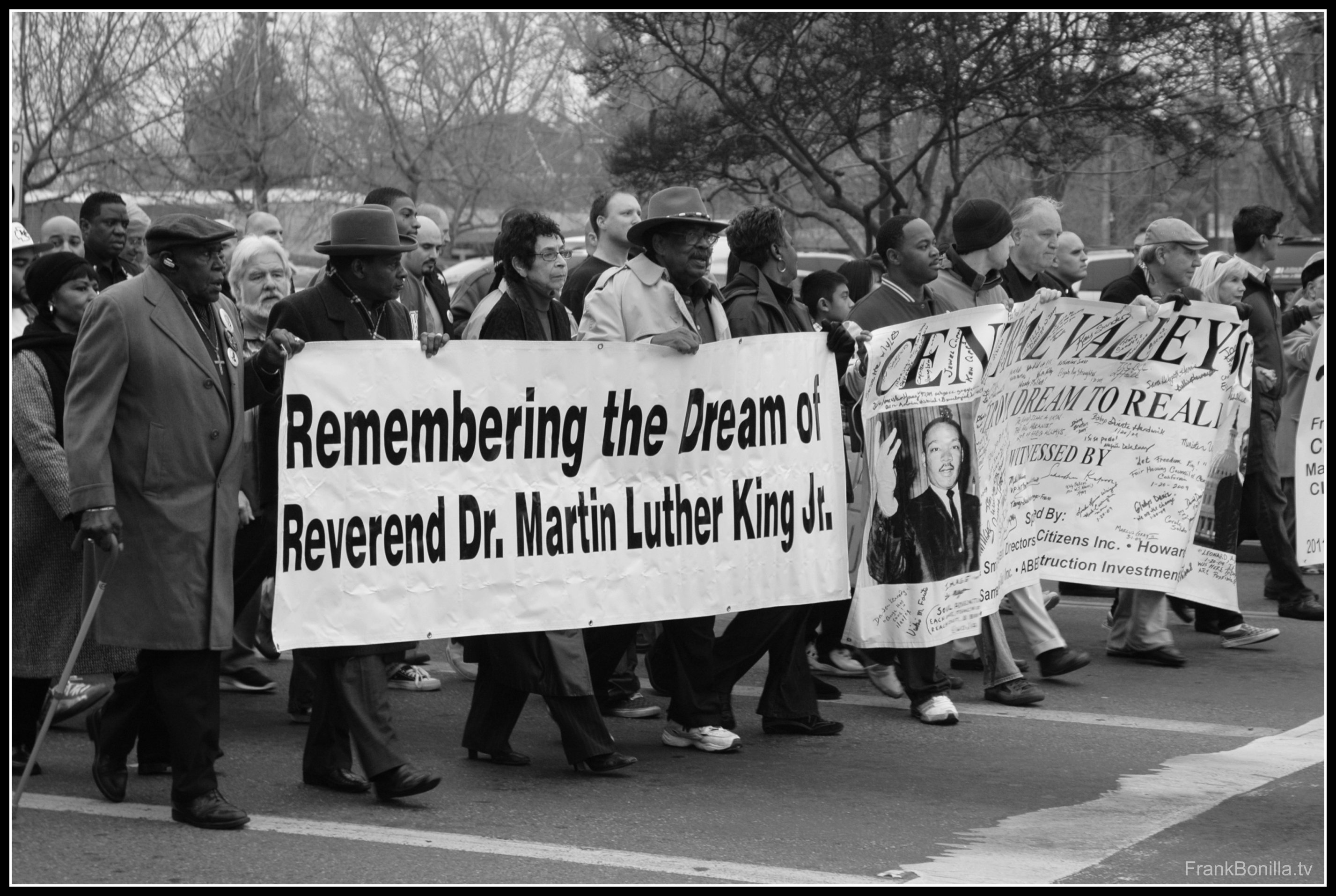 A march in downtown Fresno, California to honor Dr. King on January 17, 2011.

Until recently, the vast majority of my knowledge about Dr. Martin Luther King Jr. came from my school teachers. Since first grade, I’ve learned about Dr. King through many lenses: as a great speaker, as a Baptist minister, as a nonviolent civil rights advocate. But with all due respect to my teachers, they left something big out of the picture. After all, they could have mentioned that he was a socialist.

I’m 19 now, and even though Dr. King was a central figure in my grade school history lessons, I only learned last year that a guaranteed basic income for all Americans was a major part of his dream for America. Dr. King outlined an economic bill of rights, which you can read about here.

His plan to organize a march for the poor on Washington D.C. to demand measures to ensure economic equality for all from Congress inspires me. Just a few years ago, if you had asked me if I was a socialist, I would have said no. My only frame of reference was Marxist-Leninist socialism: you know, the dictatorship kind. But if you asked me to describe what jobs I think the government should perform, my answer would have been “to take care of all of its citizens and provide them equal opportunities.”

So like many young voters who are engrossed in the 2016 election circus, hearing Bernie Sanders speak about ‘democratic socialism’ piqued my interest and led me to do more research. An American socialist running for president seemed kind of unprecedented. The very idea opposes an economic narrative that the country has taken for granted since the Cold War: the assumption that anything socialist is bad for America, whether it’s an idea or a person. Even though that assumption is decades old, I get that some older people still have reservations about socialist politics. They still have reservations about Dr King’s civil rights work, too. To him, and many others, economic and civil rights are fundamentally linked. Why don’t schools agree?

I was taught about socialism as part of the United States’ Cold War with the Soviet Union, a conflict which turned “socialism” into a four-letter-word in the USA. Calling someone socialist was a common smear tactic back then–so-called “red-baiting” was used against Dr. King during his career– and it still has power today. What we don’t get taught about is that, like Dr. King, there were mainstream American socialists long before Bernie Sanders.

Senator Sanders often compares his proposed policies to those of the most-elected US president ever, Franklin Delano Roosevelt. He’s remembered for programs like the ‘New Deal’, which provided government support in many aspects of the economy. Even though he died before the start of the Cold War, FDR’s legacy has not gone unblemished by the ideological battles that have churned in the States ever since. The so-called Red Scare generated a tidal wave of fear in response to ideas which were seen as radical. The echoes of those fears significantly impact the ideas our culture sees as acceptable, which in turn changes the way those ideas are taught in a classroom setting.

I’m not calling teachers biased; quite the opposite. Public school teachers don’t get to pick and choose what they’re going to teach, and if their political beliefs do influence what they teach, it’s grounds for them to lose their job. And to be clear, that’s good! A teacher’s beliefs shouldn’t factor into their lessons. But when the state mandated curriculum itself is even subtly politically motivated, it means all students come out of school with only a partial understanding of critical figures, events, and ideas in history. The onus is on students, like me, to go out of our way to learn the things we don’t know we weren’t taught.

Despite all this, the fact that a socialist has become a popular candidate for president doesn’t surprise me.

Socialism is as American as Social Security and apple pie, and Sanders is just reminding us of this. He’s not just running for president; he’s pushing for a broader political discourse. His rallies don’t just garner support for his campaign; they make it impossible to ignore the thousands of progressive and independent American voters who support him. In that fight, I think it’s clear that he’s already winning. But the effects of that shift don’t end with his campaign.

At least as far as I’m concerned, learning more about socialism has driven me to reexamine the accepted stories of American history and its icons, not least of all Dr. Martin Luther King Jr..  His real vision was more complex than I used to believe, and more relevant that I could have imagined. His unrealized poverty march of Washington would have fit in well with more modern movements like Occupy which challenged the unequal distribution of wealth in our country.

Every year, when MLK Day comes around, we have an opportunity to consider his perspectives on race, history and poverty, and how they could apply to the issues we face today. Odds are those issues would be more familiar to him than we realize.