Donate Now
The site where Michael Brown's body lay for about four hours after a Ferguson, MO police officer shot him on August 9th. 27-year-old resident Darren Seals, who saw Brown's body that day, said, “Back in the day when a slave master would hang a slave, he would leave them there for a long time so the people could see it and it could strike fear in their hearts. But what they don’t understand is that it didn’t make us scared. It made us furious.” Photo: Brett Myers/Youth Radio
08.26.14 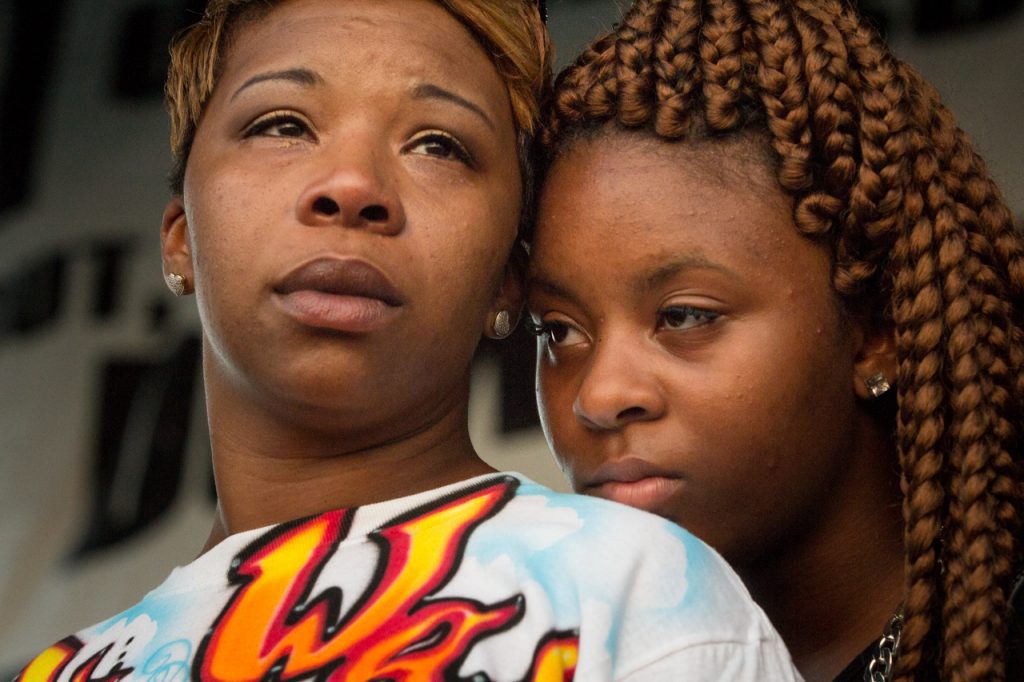 Youth Radio’s Myles Bess has been reporting in Ferguson, Mo., where 18-year-old Michael Brown, who was unarmed, was shot dead by a police officer on August 9th. The shooting touched off protests and sparked a national discussion about race and justice. Bess lives in Oakland, Ca. Five years ago, he lived through the police shooting of another unarmed young black man named Oscar Grant. He reflects on what happens next as things quiet down in Ferguson.

I was 14 years old when Oscar Grant was killed just a few miles from where I live. Grant was unarmed and lying face down on the BART platform when a transit cop shot him in the back.

Protesters in my town also demanded, “No Justice, No Peace.” But justice never really came for my community. The police officer who killed Grant was found guilty, but he spent only a year in jail. And real justice, like making sure something like that never happens again, seemed then and now like an impossibility.

Marvin Stokes is one of the few bright spots in Ferguson right now, and he’s only four years old. I kneeled all the way down to the ground to ask him if he knows where he’s standing.

“Do you know what happened?,” I asked.

A little over two weeks ago, Michael Brown’s body was lying a few feet away for hours on end. There’s a huge graduation photo there now, propped up in the middle of the street. As cars approach, the smiling cap and gown picture gets brighter and brighter.

And then when the headlights pass, it goes dark.

“I feel pain,” Joelle Smith told me at the makeshift memorial. He worked with at risk kids for 14 years. He’s visiting Ferguson from Macon, Georgia. “I feel pain because he could have been one of my students…18-years old, he’s about to go to college, and isn’t that what we teach our kids to do. Three weeks ago he had dreams, and now he’s in the ground,” said Smith.

Smith said he fully expects more unarmed young black men will be shot by police. But others at the shooting site told me they’re hopeful change will come, and that they’ll be out there standing by until it does.

I hop in the car to take one last spin through town looking for protesters.

As we drive down West Florissant, literally the only guy here is Don Lemon and company from CNN. No protesters. Hardly any police. It’s literally crickets…or maybe they’re cicadas.

My last stop, I caught Missouri State Police Captain Ron Johnson’s nightly press conference. After Capt. Johnson announced that tonight there was no tear gas, no smoke device, no mace, no arrests, and or bullets fired, a local reporter asked a less technical question.

“Did you drive down West Florissant tonight?” asked the reporter.

“Just your feeling of seeing that after everything else you’ve seen and walked through and stood in the middle of for the last 15 days or so.”

The question on my mind is, back to what exactly?