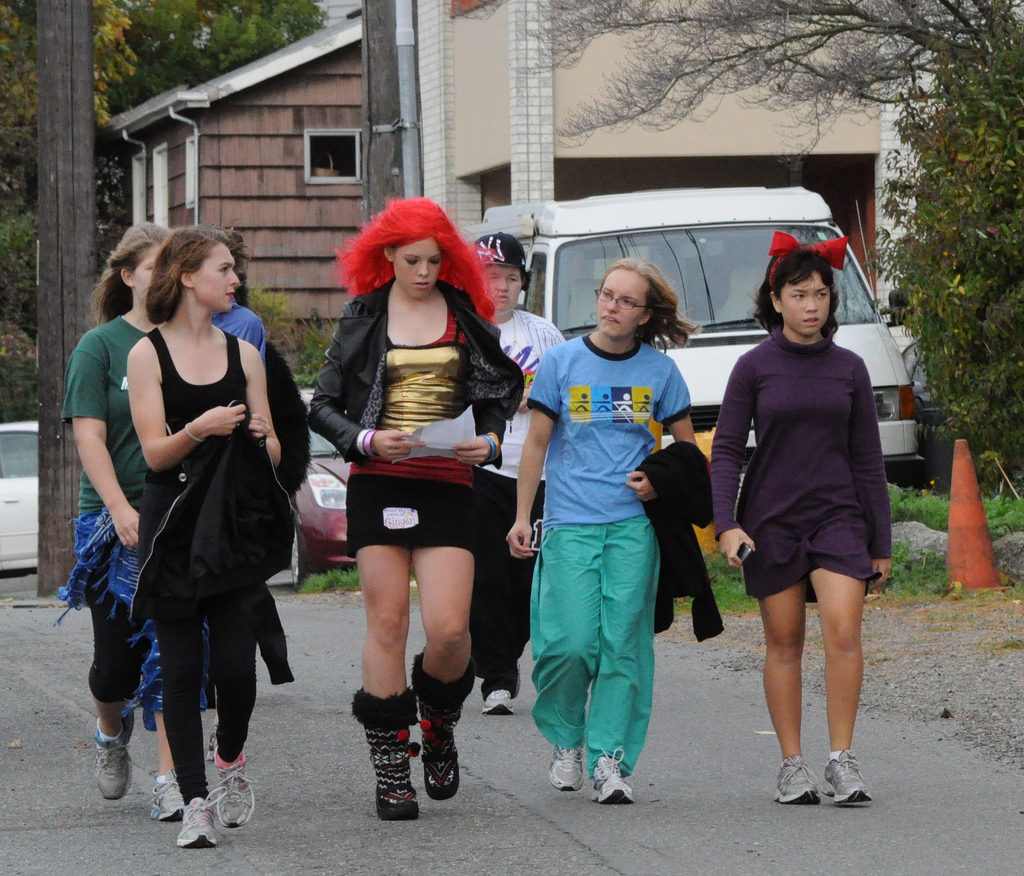 My cousin Justin Cruz always has the worst luck. He grew out of trick-or-treating in the most painful way possible—in a tight spandex costume at the age of 14.

“I was dressed up as Bumblebee from Transformers, and like the lowest point of the night was when I see a kid right in front of me,” said Justin. “He’s about 4 and he is wearing the same costume as me. I was like, ‘Dang. I’m wearing a youth extra large right now.’ It was the last time I ever went trick-or-treating,”

While Justin found out the hard way that he was too old for trick-or-treating, it’s not always that clear. So, a few weeks ago I decided to go out on the streets of my hometown of Benicia, California with a microphone instead of a costume. I wanted to find out just how old is too old.

I went to my next door neighbor’s house and knocked on the door, just to see how she’d react to a 17-year-old standing outside her door, yelling, “Trick-or-treat!”

She swung open the door, rolled her eyes, and called out, “Oh, yeah, right!”

I’ve known my neighbor Madonna Mone my entire life. Her son and I grew up trick-or-treating together. I asked her, “Do you ever look at someone and think, ‘You’re too old to be trick-or-treating?’”

“Well, it kind of depends,” she said. “It’s when they come, they’re 16-year-olds, and they don’t really want to be there and they just want your candy. Then it’s not cool.”

“Have you ever rejected someone because of their age for giving them candy,” I asked, “or is it just like you’ll give everyone candy regardless?”

“I’ll give everybody candy. It doesn’t mean I won’t give them crap as well.”

And by “crap,” Madonna meant that if you’re not in a costume, you’re getting a dirty look. It’s not just adults who give teenagers a hard time for trick-or-treating. Fifteen-year-old Nila Venkat said sometimes it’s our own peers.

“When I was like 12,” said Venkat, “basically what happened was a bunch of eighth graders came up to me and my friends and said, ‘Oh wow you guys still trick-or-treat? That’s such a little kid thing to do, you guys should go to the parties and stuff.’”

It was the last time Nila went trick-or-treating.

For me, I stopped in high school. I was a ghost, you know, sheet over my head. Very unoriginal, but I still looked forward to trick-or-treating. Or at least until my teacher assigned an essay for homework on the night of Halloween. I was so bummed. It was like my childhood was coming to an unexpected end.

“I know that I trick-or-treat out of the spirits of still being a kid,” said Cassandra Gutierrez. At 19-years-old, she does more tricking than treating. She still dresses up, but only hits the houses with candy bowls outside.

“It’s not something like, oh, I don’t want to go into adulthood. I think what it is, is not growing up all the way—still having child elements to your life,” said Gutierrez.

Halloween used to be a chance for me to hang out with my mom and make costumes together. One year she stayed up late the night before Halloween to help me paint red stripes on a white shirt so I could be Waldo from Where’s Waldo. Yeah, I miss that, but I am too old.

Now I can look forward to one day having my own kid and taking them trick-or-treating or helping them out with their costume. Halloween doesn’t end, it just changes.