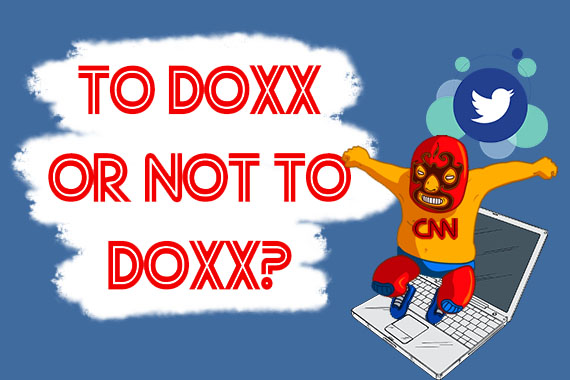 It seems like just last week the discourse around CNN was that they had decided that the best way to cover the Republican health-care bill, which will kill people, was an emoji scale. Truly those were simpler times, as now we are in the late stages of… what are we calling this? MemeGate? CNN’s holiday misadventures? That time lawyers threatened to doxx somebody for no real reason? I don’t know what to call it other than draining.

For those blissfully unaware, on July 2nd, Trump tweeted out a GIF where he wrestled CNN into submission, as part of the endless war on media that he loves, and it went viral, as it showcased a new medium for his platform. No longer constrained to text or pictures to spew bigotry, Trump’s now got GIFs .

CNN, directly in the cross hairs and already hungry for content, crafted a response to capitalize on the attention they were receiving and well, it all went to hell. 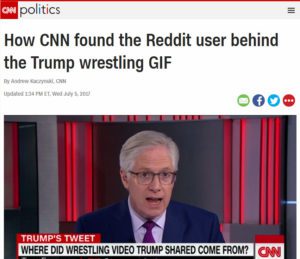 The headline “How CNN found the Reddit user behind the Trump wrestling GIF” is already a bit weird, but sure, go all out while you are in the spotlight. The KFILE team at CNN has done some interesting investigations before, and on it’s face finding out how Trump came into contact with the GIF is interesting, as it wouldn’t be the first time someone directly involved with the white house was off in the Alt-Right’s internet.

That’s not the story we got however, as much of the story details the creator of the GIF himself, HanAssholeSolo, and how CNN found out personal details from his Reddit history. And it turns out, HanAssholeSolo is into more than just Trump wrestling GIFS. He’s also created images that are are, shall we say, more than a TAD antisemitic. And as you can imagine, he got some crap online about it.

Here’s another meme from the guy Trump tweeted, this one showing CNN personalities with Jewish stars. pic.twitter.com/BJoJ751eMQ

More on the Twitter fallout in a second. For now, back to the CNN article. Now that we are fully in the weeds, a chunky block of text comes in to reassure us later on in the article that CNN would not be posting his name because he apologized, but also if he messes up they have no problem doing it.

“CNN is not publishing “HanA**holeSolo’s” name because he is a private citizen who has issued an extensive statement of apology, showed his remorse by saying he has taken down all his offending posts, and because he said he is not going to repeat this ugly behavior on social media again. In addition, he said his statement could serve as an example to others not to do the same.

“CNN reserves the right to publish his identity should any of that change.”

It’s a wild (and heavily lawyered) thing to say, which is where the backlash begins. The backlash came in waves, first from many members of the media. From questions ranging from why that block of text was included to why it was even centered on him, to bluntly talking about how CNN’s apparent bullying is a decidedly bad look for them.

Andrew Kaczynski, the man for whom KFILE is named who has the byline on the piece, tweeted out support of the statement, claiming that people were simply misinterpreting the statement, only reigniting everything for one last round of articles and twitter posts.

CNN specifically choose not to reveal this guy’s identity and to say we threatened anyone is a total lie.https://t.co/f02hLaVRqu

In the least surprising turn imaginable the Alt-Right, led by Nationally Important Failson Eric Trump, went on their own campaign to rail against the article. From talking about how CNN blackmailed the “kid” (one of the claims is that HanAssSolo is 15, according to Eric, though Kaczynzki disputes this), digging up “dirt” on Kaczynski and making threats of their own, they stuck to their usual deluded fantasy playbook, which would be funny if these people weren’t terrifying.

So, having quickly summed this all up, let’s talk about why it’s all a giant mess.

Journalists have talked to a wide swath of terrible people over the years, from cartel bosses and terrorists, to low level managers at corporations caught in scandal, all with anonymity as a given. It’s part of the job, if the anonymous person in question is not the direct target of your reporting and/or has little public power, you keep them anonymous. Look at Watergate, we didn’t need to know who Deep Throat was to bust Nixon.

What matters for his anonymity is if he is a public figure. And at least so far, it appears he isn’t. Unless it magically turns out this is a congressman doing this, or Palmer Lucky yet again being trash, it does not matter who Hanassholesolo is. Not everyone agrees. People ranging from random voices on the internet to congressional candidates, voiced support for doxxing HanAssholeSolo, highlighting the opinion that he does seem like a bad dude with toxic ideas. But the way I see it, as good as doxxing’s specific form of schadenfreude might feel in the short term, revealing the identity of one bad person does nothing.

You don’t kill fascism by doxxing one person, no matter how vile their thoughts are. History has shown the fight is much harder and longer. The good news is that while this dipshit’s name remains private, you probably already know at least half a dozen people who are very proud of their toxic ideas that you can be against, and dozens more that keep quiet about them. You kill fascism by fighting it at work and school, by organizing against it, by taking care of the marginalized people in your life who feel its effect most bluntly.