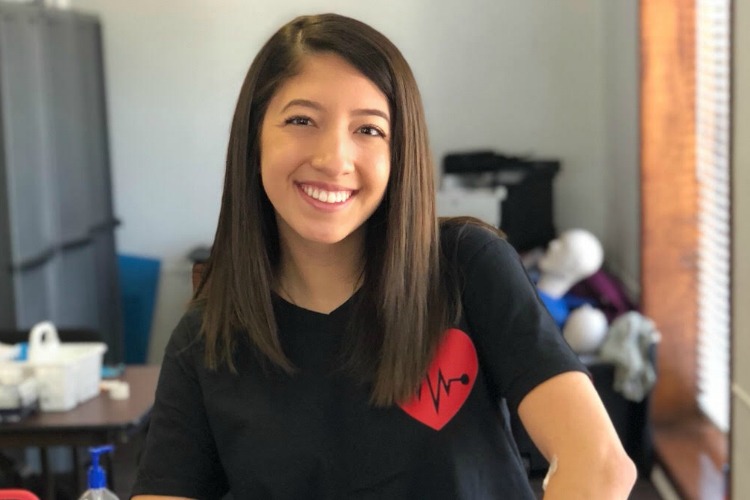 Amber Estupinian is a 21-year-old nurse technician at Clear Lake Regional Medical Center, one of the health care facilities that took in patients from the Santa Fe High School shooting.

She’s been working at the medical center since early March. In August, she is slated to begin a nursing program at Houston Baptist University, with the goal of becoming a registered nurse.

On Friday evening, just hours after the shooting, Angela Nguyen spoke to Amber for Youth Radio.

Note: This interview has been lightly edited for clarity.

Q: Can you tell me what happened, from your perspective?

I woke up, and I received a text message from my manager asking if I could come in to help out on the unit. And initially when I saw it I thought, I’ve been at work four days [in a row]. I don’t want to go back. And I told her that I couldn’t because I had plans with my family.

Well, after … going on social media and turning on the TV, I noticed that there was a big shooting really close to home – 30 minutes [away], specifically, in Santa Fe, Texas. At the time that I was watching it, [news reports were saying] eight students died and 12 were injured. Immediately, I thought, You know, some of these kids might be at our hospital. Let me find out more about this.

I started to open more of my messages, and I saw that one of my coworkers was floated to the ER, and I immediately thought, My boss is probably texting me because we’re short a tech on our unit because [my coworker] was moved down to the ER to help out with everything going on in this terrible event.

So I went in to help around 12:45, and everyone was really thankful of me being there because it was a crazy day. A lot of the nurses had to leave early so that they could pick up their kids from school because a lot of the buses were being used to evacuate the Santa Fe High School.

During my shift at work, I was asked to go to the lab to drop off a blood sample, and on the way to the lab I passed the waiting room for the ER.

But just walking past that and seeing everyone so sad and broken really … got to me.

Q: You being there at the hospital and seeing all that, how did it affect you?

At the end of the day, it made me feel good that I could actually provide some kind of service to these families.

But it was really difficult seeing these families heartbroken and crying on each other’s shoulders and, just, tears falling down on their face.

It’s really hard to see that, but working in health care, you’re so used to seeing things like that every day that your immediate response to seeing something like that is, Wow, I want to help you, and I want to do everything I can to help you.

Q: Being a young medical professional and knowing that the victims were pretty close to your age, how do you feel like who you are – your role in the hospital, but also who you are as a person – affected your taking in [of] today’s events?

For one, it makes me really grateful of being here and given the opportunity to, you know, just live every day because there’s a lot of things we take for granted every day. And, you know, experiencing this terrible event and seeing these families broken and everything, it really makes me grateful for everything that I have in life.

But as far as my role in the hospital, it makes me feel happy that I’m doing something so rewarding that makes me feel good as a person. And that ultimately makes me feel whole. These terrible events really bring light to everything we do in health care. And like, how many sacrifices we make … Like, I worked 57 hours this week and it’s only Friday, but I’ve also helped so many people in those 57 hours.