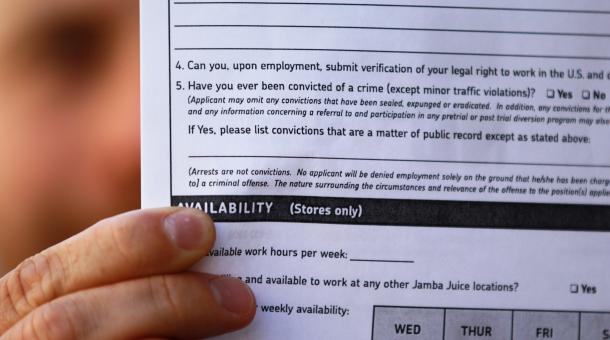 Seventeen-year-old Andrew is filling out a job application for a Jamba Juice in Oakland, Calif. He’s making his way through the basics, filling out his name and contact information. However, question five posed a challenge. It was a yes or no checkbox which read, “Have you ever been convicted of a crime?”

“I will check yes,” said Andrew, who requested anonymity for this story. When he was 14, a high school freshman, he took a gun to school. It is a shocking act for many, especially in the wake of the Newtown, Conn., shootings, but Andrew says he did it to be cool. Three years later, he is haunted by that decision.

In the space below the checkbox where it asks for specifics, Andrew scrawled “weapon charges.” It’s pretty easy to imagine what an employer would think reading those two words. Little did Andrew know, they are words he could have kept to himself. In California, and many other states, young people who are processed through the juvenile court system, are never “convicted.” Instead, they are “adjudicated.”

Rachel Johnson-Farias, a lawyer at the East Bay Community Law Center in Berkeley, said that adjudication is basically a fancy word for when a court finds allegations to be true. Johnson-Farias explained that while the difference between “adjudication” and “conviction” is slight, it matters when filling out job applications. When asked if you’ve been convicted of a crime, “If you don’t have any adult convictions, you can say ‘no’,” said Johnson-Farias.

However, in some states, like Iowa, juvenile records are public, meaning that juvenile offenders should check “yes.” And even in California it could be a “yes,” if the application asks about arrests instead of convictions. Confused yet? Many places have eliminated this type of checkbox altogether with laws called Ban the Box.

“Essentially, it forbids employers asking about a person’s criminal record,” explained Newark, New Jersey City Council Member Ronald Rice. He wrote the city’s Ban the Box law, which prevents employers from asking about records until after they make a tentative job offer. Forty-three cities and counties and seven states have passed similar laws. Newark’s is the most sweeping.

A study in the journal Pediatrics finds that nearly a third of adults in this country have been arrested by age 23, and Rice argues that pre-screening applicants for criminal history creates a permanent underclass. “Continually penalizing people (without giving) them the opportunity to apply for work,” said Rice, “is really anti-American, but it’s also anti-business.” Anti-business because the whole economy suffers when people can’t find jobs, argued Councilmember Rice.

But imagine you’re an employer who learns at the very end of a hiring process that your top candidate committed rape or murder. “You look at that,” said George Allen from the Seattle Chamber of Commerce, “And you’re like, ‘Oh my gosh could this be safe for my customers, or in some cases for my employees?’”

The Seattle Chamber of Commerce opposed early drafts of a citywide Ban the Box proposal, because of costs and risks. For example, what if an employer rescinded a job offer after learning about an applicant’s criminal record? Allen said, “That applicant could turn around and sue the employer for unlimited emotional distress, and we just felt that that was too heavy a hammer.”

After meeting with resistance, Seattle lawmakers released a new Ban the Box proposal, which Allen said strikes a better balance. If the law goes through, Seattle employers will have more control, and applicants with criminal records might have a better chance at starting over.

In Oakland, 17-year-old Andrew says it’s all about redemption.

“That never was really me,” said Andrew, “You can’t really hold a person’s past against them because the person could be different.”

Recognizing people’s capacity for change may have something to do with why lawmakers in eight more states — from California to New Jersey — are considering statewide Ban the Box laws, trying to figure out how much a person’s past should affect their future.