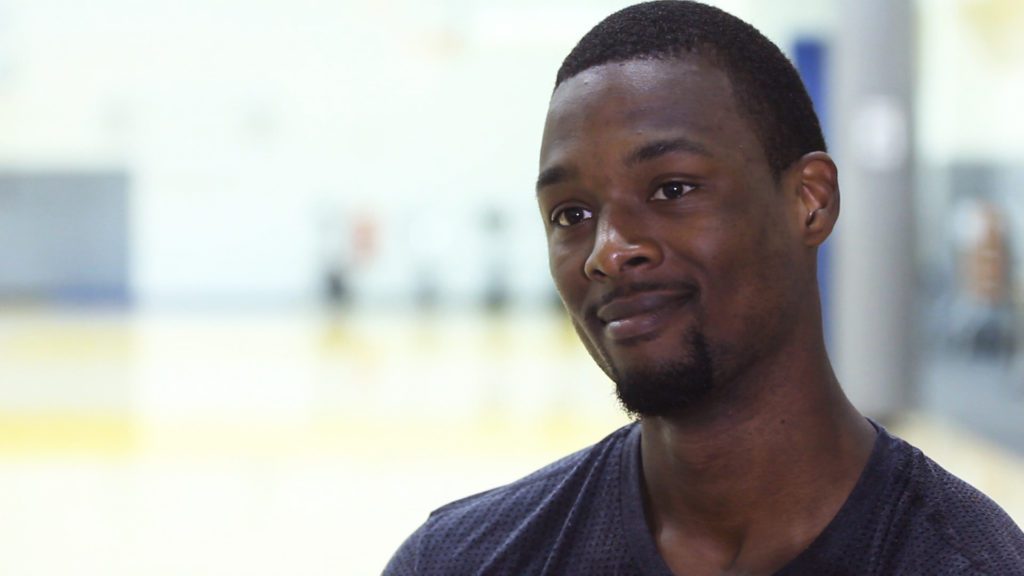 In the middle of downtown Oakland, between nondescript office buildings, is a Marriott hotel with a secret. Hidden on the fifth floor, past a set of nondescript gray double doors open, is the practice gym for the Golden State Warriors.

Inside, the Warriors’ Stephen Curry, can be seen sinking shot after shot of three-pointers. The moment Curry takes a break he is swarmed by reporters asking about things like making NBA history. “Our focus is on the big picture,” says Curry. “And what it’s going to take to win the last game of the season. That’s the only goal we really have.”

The team’s youngest starter, Harrison Barnes, dribbles two balls at once, practicing until he’s drenched in sweat. The facility looks like a nice high school gym, not the kind of practice space you’d expect for the NBA’s best team and their reigning MVP.

For decades, the Warriors were a struggling team – much like their home city of Oakland. While the city had financial problems and suffered from record crime rates, for decades the Warriors had issues with poor management and no star players. But now, with the Warriors on track to have the most wins in a single season, and Oakland a destination for millennial tourists, both are having a renaissance. 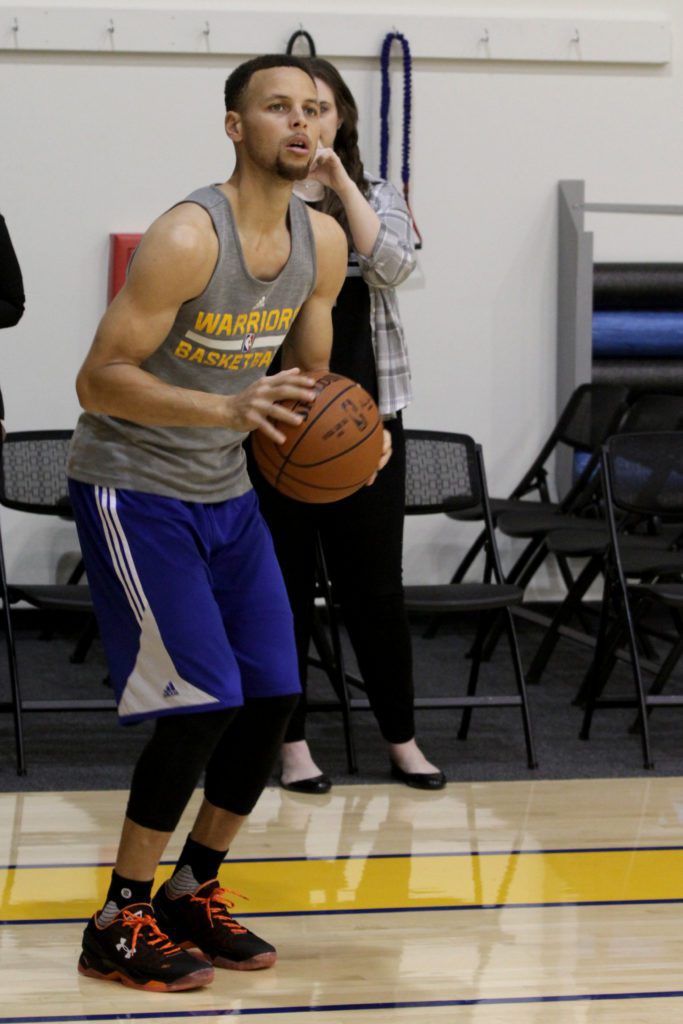 While the Warriors management has announced the team is moving to San Francisco in three years, many players have made a home in downtown Oakland. Forward Harrison Barnes grew up in Iowa. He came to Oakland when he was drafted at 19 and found he loved the city.

“When it came to the offseason it was pretty much a no-brainer that I’d stay around here,” Barnes says. “There was just so much to explore so much to do that I wanted to stay around here. For four years now I’ve been living here all year round.”

Before the current wave of gentrification hit downtown, the Warriors set up the team’s rookies, just blocks away from their practice space in what was a rough part of town. These days, many players have made a home in downtown Oakland. Oaklanders often report seeing players at the grocery store, coffee shops, pumping their own gas and appearing at events with youth groups.

Barnes recently did a photoshoot at Belly, a mom and pop restaurant on the corner of his downtown neighborhood. Passersby quickly took to social media to capture the moment. It’s clear the Warriors support for small local businesses wins them a lot of love.

Twenty-three-year-old Warriors forward, James McAdoo, says coming from Virginia, he’d heard the negative stereotypes about Oakland but now loves it and sees the correlation between the success of the city and his team.

“When we’ve hit rough patches we’ve continued to persevere,” McAdoo says. “I think that also helps the Warriors being a bright spot that the City of Oakland can rely on.”

The Warriors’ success has done a lot for the city’s pride. Kyndall McCoy is a security guard who works in downtown. 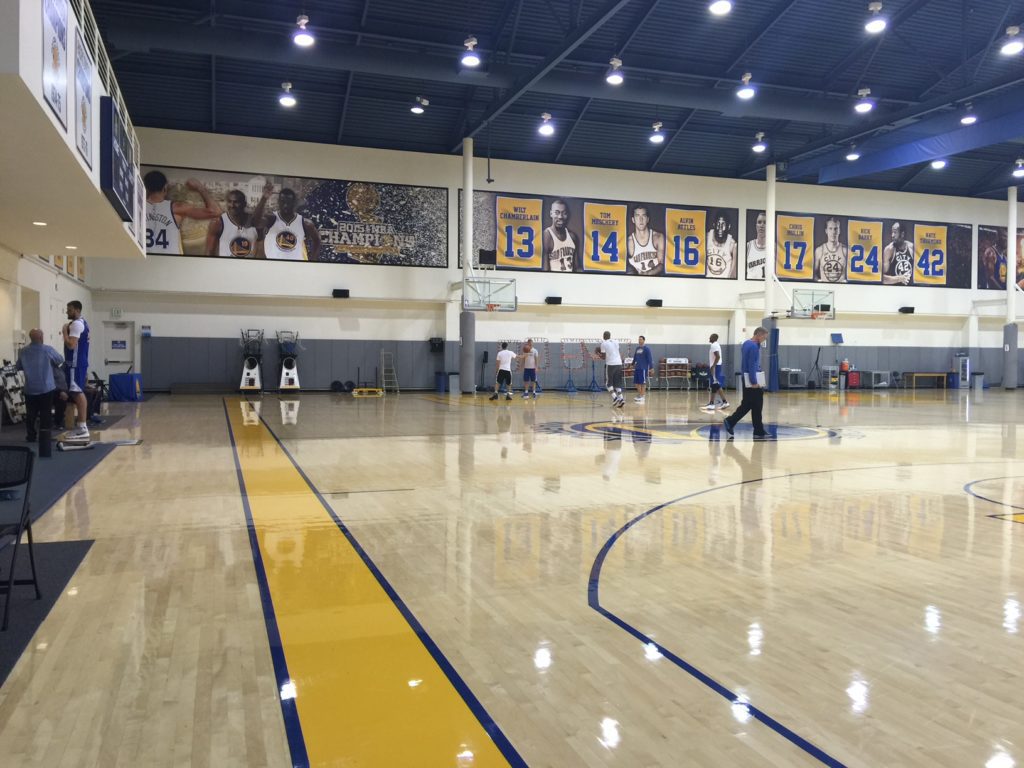 “It really put a positive note on the city,” McCoy says. “All downtown you see banners of “Warriors,” “Go Warriors,” so that’s a good, positive thing for Oakland.”

Sam Amick covers the Warriors for USA Today Sports. Amick grew up in nearby Pleasanton and knows Oakland well.

“It’s a city that is known for its grit. It’s a tough place to come up, but it’s also a great place in a lot of ways,” Amick says. “The mood with the team, doing what they’re doing, it’s contagious. People, their smiles are a little bit bigger and they’re talking about last night’s game, and again, the connection is: these guys are their guys.”

Warriors power forward Draymond Green is one of “their guys.” At a press conference, he spoke about the way the players thrive off the energy of their local fans.

“The support that we receive around here is amazing. And so, you can tell that it’s doing a lot for the city. It’s bringing life to the city. That’s the position that you’re in, you want to try to take advantage of that. I think we’re doing that and I’m happy to be in a position to help.

As the Warriors and their fans continue to chase history, Oakland is enjoying the moment.

In the video below, Youth Radio’s Garrison Pennington interviews Harrison Barnes of the Golden State Warriors about his love for Oakland, CA, what it means to beat the 95′ Bulls record of 72 wins and what he is doing to become a better basketball player.