Diamond Ruby Eugene, 20, suffers from severe asthma. She lives in San Francisco’s Tenderloin district with her baby and mother in a subsidized one-bedroom apartment. (Illustration by Dominik Vaughan.)

You probably know someone who has asthma. A kid who sits out on the mile run in P.E. class. Or the girl who has to go to the school nurse to use her inhaler. Maybe you even have asthma yourself. About one in 12 Americans suffer from asthma, according to the Centers for Disease Control and Prevention. For black youth, that rate doubles to one in six.

Asthma is so common that its severity is often underestimated. Twenty-year-old Diamond Ruby Eugene from San Francisco has been living with asthma her whole life.

In an interview at the Pediatric Asthma Clinic inside Zuckerberg San Francisco General Hospital, Diamond likened her asthma to a disability. She said that she can be out of the house for four hours at a time before her symptoms take over.

According to the CDC, black youth have asthma at a rate twice as high as the general population. (Illustration by Dominik Vaughan.)

“You don’t want to be out and be in a situation where you have a really bad attack,” she said. “So, it means that you can’t really have a full life.”

Diamond’s health is so fragile that she doesn’t feel comfortable going out alone. And because she is also the mother of an infant who is too young to be left alone–Diamond, her mother, and her baby Kylan travel as a one unit.

According to her mom, Dorothy Blakley, Diamond’s asthma can be triggered by the weather. “There’s a time we saw the clouds come,” Blakley said. “And we were running. Trying to outrun the clouds, trying to run home–to get her home [be]cause the asthma was already starting to show up.”

Blakley also suffers from asthma. She remembers the first time she noticed Diamond exhibiting asthma symptoms. “She was so little,” Blakley said. “I was thinking to myself, ‘What can I do?’ But there’s nothing I can do. So she just suffered.”

For years, Diamond says she managed her health through frequent emergency room visits. But now, she’s able to do check-ins at the asthma clinic, which serves low-income youth. There, she has a community health worker, Stephanie Williams, who conducts home visits.

At Diamond’s apartment, Williams sits with Diamond to make sure she is properly using her inhaler and spacer. When she’s inspecting the apartment, Williams looks for mold or cigarette smoke to decrease potential asthma triggers. But she also considers the social factors in Diamond’s life–the joys and the stresses. “Especially for kids who have asthma–especially if you’re one of the sensitive kids–something as simple as stress, or laughing or crying can actually send you off into an asthma episode,” Williams said.

The Pediatric Asthma Clinic uses an approach known as a medical-social model. While this method is not yet widespread, it is one new tool for managing chronic illness — and takes into account all aspects of the patient’s life, including unexpected things like housing insecurity. On this trip, Williams brought over listings for low income housing.

“Where am I gonna get that kind of money?” Blakley asked, as she examined the flyer for a one-bedroom, below market rate apartment that runs $1,300 a month. 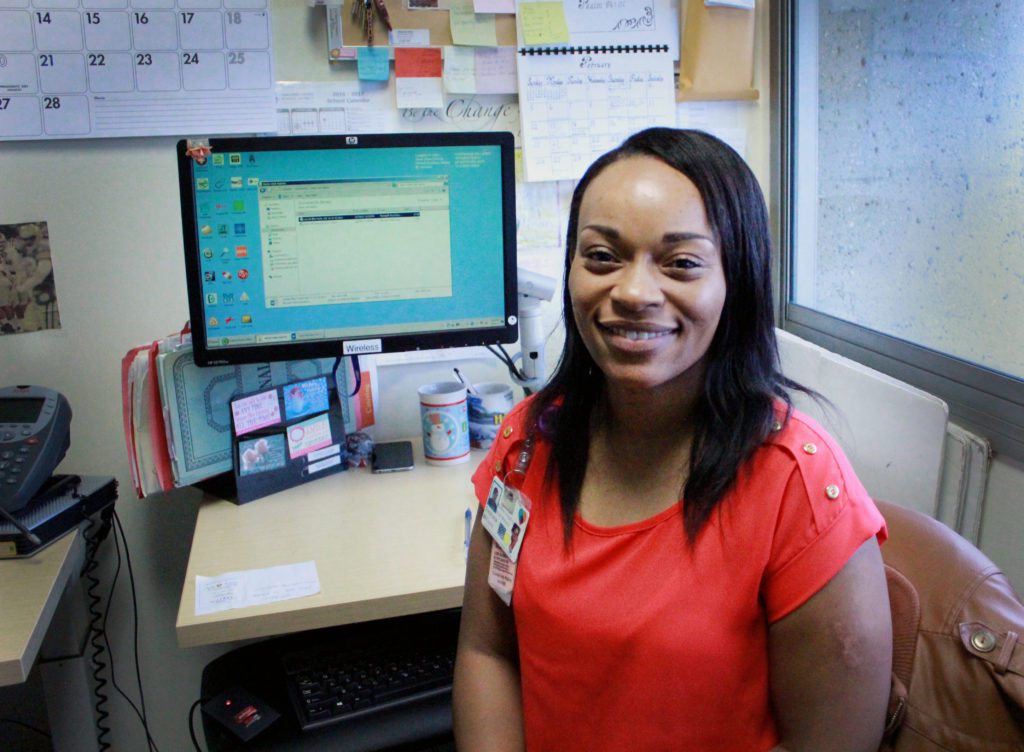 Diamond, her baby, and her mother all live in subsidized one-bedroom apartment in San Francisco’s Tenderloin neighborhood. Diamond says she doesn’t feel safe.

“The area is ridiculous,” Diamond said. “I think it’s the worst area in San Francisco. There’s just a lot of people–it’s nothing but drug use and drug dealers and just all types of people with mental illness. [It’s] just crazy.”

Still, it’s a big step up from their recent past. Diamond and her mother were homeless for nearly two years before they found their current apartment. 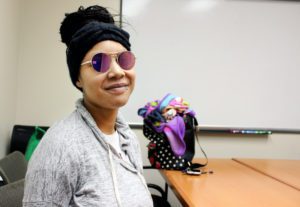 “You know, when we couldn’t get a bed at the shelter, it was, you know, stay at an auntie’s house or stay at one of my mom’s friends houses,” Diamond said. “Which is stressful when you have to call a place to lay your head for the night.”

Diamond’s health issues extend beyond asthma. She is a cancer survivor, and she currently suffers from chronic migraines. Her current insurance is covered through Medicaid. With the Republican draft bill in Congress calling for a rollback of Medicaid expansion, Diamond’s future health coverage is uncertain.

According to Williams, a repeal of the Affordable Care Act would impact the community at large. “People are gonna be using the emergency room a lot more. You’re not going to get charged for the emergency [room]. But you will be charged for a [doctor’s] visit,” Williams said, hearkening back to Diamond’s own history of frequent ER visits. 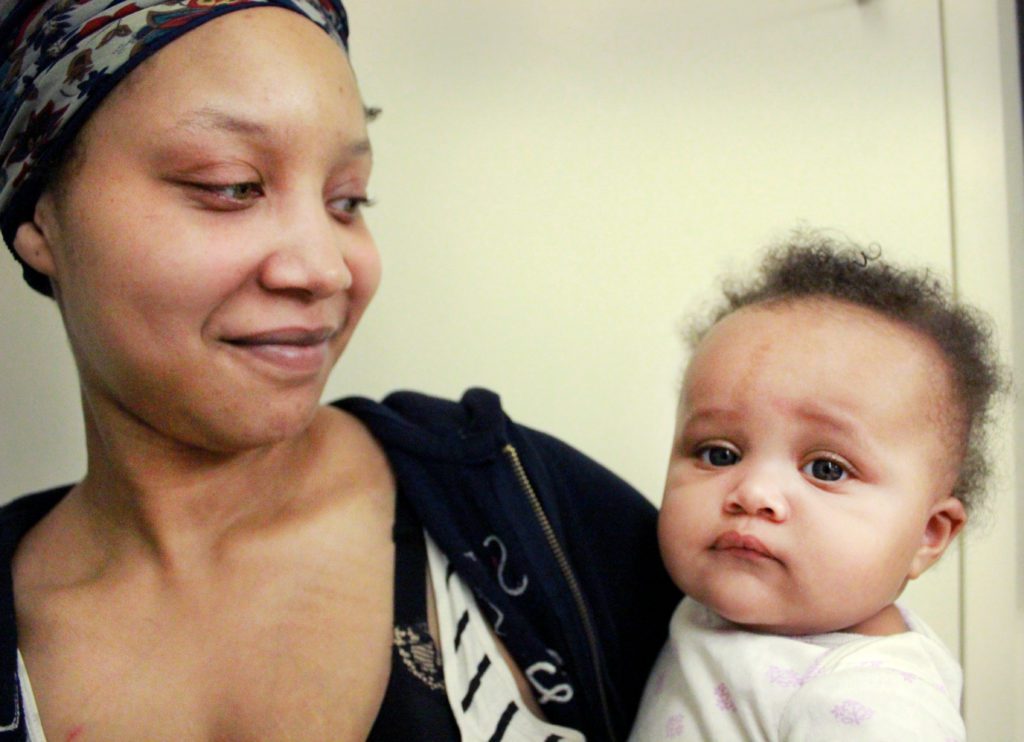 Diamond Ruby Eugene looks at her daughter. Diamond says that her baby Kylan is one of her biggest motivators to go back to school and pursue her dreams. (Photo: Shawn Wen/Youth Radio)

On top of Diamond’s issues with her health and housing, she is taking care of an infant. A baby may seem like a heavy additional burden, but in Diamond’s case it sometimes brings unexpected health benefits, according to Williams.

“Of course, being a parent is stressful, no matter how beautiful and amazing it is,” Williams said. “It’s funny, because I see Diamond, and I know she’s so happy and so blessed to have her daughter. So I would actually say it improves her asthma.”

“She’s an amazing little bundle of joy,” Diamond said, referring to her daughter. “I love her so much. She’s another reason to keep me motivated. To keep me to want to go to school, to make a better life for her. To give her what I didn’t have as a kid.”

Diamond is using her resources to attempt to reverse her family’s health patterns. When she was younger than her daughter Kylan is now, her mom Dorothy Blakley already noticed Diamond exhibiting asthma symptoms.

But so far, Diamond’s baby’s health is fine.