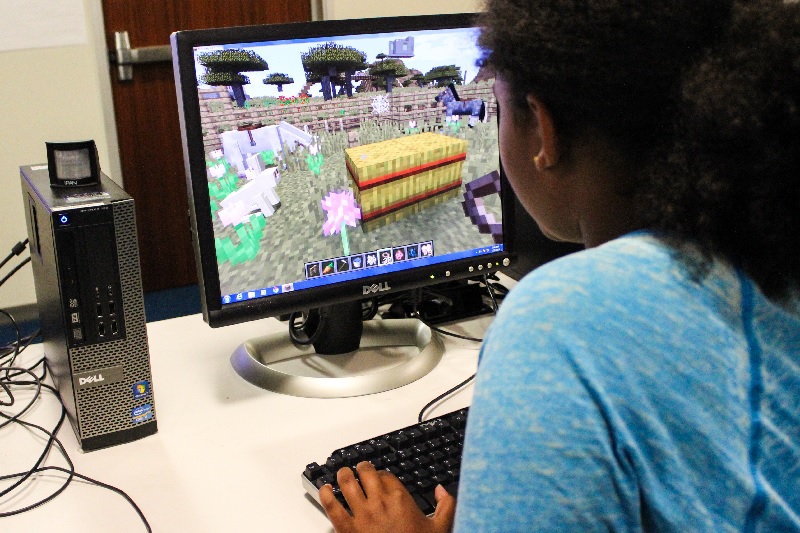 At ten years old, Maya Simon has dreams of becoming a veterinarian so today she uses Minecraft to build a farm. Photo by: Olivia Cueva/Youth Radio

Featured Media Resource: AUDIO: “Learning Coding and Citizenship” (NPR/Youth Radio)
This past summer, more than 2,000 kids around the country participated in the Summer of Minecraft Camp — a “virtual” summer camp where pre-teens log in from home in their pajamas and complete challenges with the help of online teenage counselors. While video games usually get a negative rap for teaching kids bad habits and manners, organizers say that games like Minecraft can actually teach important online social skills.

What skills or lessons have you learned from playing online and video games? Do you think gaming can teach you how to be a better person? #DoNowGaming

How to Do Now

Learn More about the Debate Over Gaming

Video games are powerful tools — not just for having fun, but for interacting with other people. Whether those interactions end up teaching positive or negative lessons is a topic of hot debate in the education world.

Last year, the “Gamergate” controversycalled attention to a culture of sexism in some gaming circles, after prominent female game developers and professionals came forward with how they were harassed online. Critics have also pointed to the negative social messages associated with games like the Grand Theft Auto series, where players beat up or exploit other characters in order to advance.  The evidence that violent video games can promote aggression in children, however, is still hotly debated.

In the midst of all the controversy about the psychological impacts of gaming, there is an emerging genre of so-called “empathy” games. In these games, players navigate a digital world from a vulnerable character’s perspective — say, a depression sufferer or a the parent of a child with cancer. And other popular online multiplayer games, like Minecraft, are being hailed as ways to teach kids both technical skills and socialization — so much that video game “summer camps” are popping up to facilitate students game-learning.

This summer, Youth Radio’s Kasey Saeturn went to one such camp, called the Summer of Minecraft, where pre-teen gamers were being tutored by teenage counselors on their digital citizenship. Seventeen-year-old Ryan Dempsey said a big part of his job as a counselor is to teach kids how to keep it positive online.

“They get mad that they lost, and they will call people names,” he said. “A lot of it is just like, ‘You’re mean,’ or stupid or idiots.”

With the proper direction, he also sees kids come together in the game, protecting each other while they heal or giving each other encouragement. Learning online social skills is vital, says Caroline Knorr, an editor for Common Sense Media, an organization that helps parents make informed choices about kids’ media and technology. “Understanding that there are actual people on the other side of the screen is really one of the most essential skills that kids can learn,” she says. “That’s what leads to empathy.”

Do Next takes the online conversation to the next level: these are suggestions for ways to go out into your community and investigate how the topic featured in this Do Now impacts people’s lives. Use digital storytelling tools and social media to share your story and take action. Make sure to tag your creations with #DONOWGAMING.

ARTICLE: Why Video Games Can’t Teach You Empathy (Motherboard)
Empathy games are supposed to teach you how to be a more compassionate person, but do they really work? This article gives a broad overview of some popular types of empathy games and the controversies associated with the genre. For example, Anna Anthropy, creator of Dys4ia, a game where you play a transgender woman and that she says she designed for the trans community, says her game has been misappropriated as an empathy-builder. “If you’ve played a 10-minute game about being a transwoman, don’t pat yourself on the back for feeling like you understand a marginalized experience,” she said.

VIDEO: Using Minecraft as an Educational Tool (Edutopia) Are you out of the Minecraft loop? Get to know the basics in this video, which shows how some educators are using the game to teach middle school students communication, collaboration and digital citizenship.