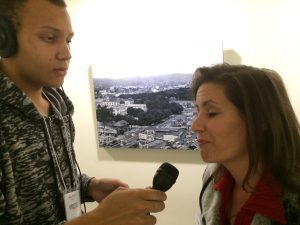 On a gray and rainy Monday near Oakland’s Lake Merritt, hundreds of people gathered at the The California Climate Leadership Forum to discuss climate initiatives statewide.  The event hosted a large number of speakers on the issue of climate change, including California’s Governor Jerry Brown and the President of the University of California, Janet Napolitano.

The Governor said that the state has a habit of making reforms that many would consider difficult. He stated that California currently uses 22% renewable energy, pledging that “we’ll get to 50%.”

Nineteen year old Pablo Gomez spoke on behalf of The Alliance for Climate Education. The organization teaches middle schoolers and high schoolers about climate change and its negative effects. During his speech, Gomez encouraged government officials to make more room for marginalized youth in conversations on climate policy. “Once young people have the tools and education… they’re going to take that and they’re going to run with it,” he said.

Oakland’s mayor-elect Libby Shaft took the request of Pablo Gomez seriously. “If you’re interested in getting involved in change, email me,” she said.

You can reach her at lschaff@oaklandnet.com.