(Listen here. This story aired on NPR’s All Things Considered.  Student and Parent Checklist for Joining Teams and  source documents below)

More than 1 million high school boys play football in the U.S. But with a growing body of evidence linking the sport with chronic brain injury, some schools are trying to change how teams play and practice. They have a long way to go. Only two states are enforcing rules that protect high school teen players on the field and in practice. This week, PBS’ Frontline aired “League of Denial,” a two-hour documentary about the NFL’s attempt to cover up evidence linking football and chronic brain damage. Youth Radio looks at three safety measures being used by the pros and compares them to what’s happening at the high school level.

The NFL adopted a new rule this season making it illegal to hit with the crown of your helmet.  In other words, ramming your head into someone.

It’s been illegal to hit with the crown of your helmet in high school football for years. But unlike in the pros, I’ve hardly ever seen it called in a game. Still Coach Nick McMaster, tries to teach us better.

At a recent practice, McMaster scolded a linebacker for leading with his head. “Alfaro, that was horrible technique. That’s why you can’t lean and put your head down when you block.” 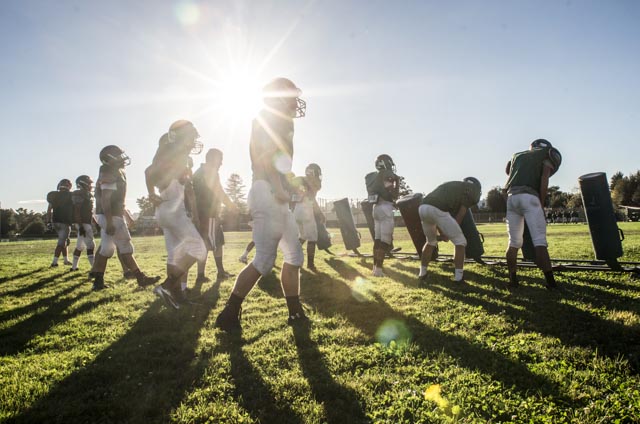 According to a survey by Nationwide Children’s Hospital, young athletes across all sports suffer 300,000 concussions each year, including my team’s varsity tight end, Mack Woodfox. “I was hit helmet to helmet from the side of my face and I stumbled over, and after that my ears started ringing and my eyes blacked out a little.”

Mack missed a week of school and a few weeks of practice. Almost 90% of concussions in football happen from player to player contact.  That’s one reason the NFL players association negotiated limits on tackling during practices.

Very few high school leagues have caught up with that NFL standard.

Texas has. The state association that calls the shots for high school sports in Texas limited full contact during practice to 90 minutes a week. KERA reporter Lauren Silverman visited DeSoto High School, about a half-hour south of Dallas. It’s home to one of the top high school football teams in Texas.

At a recent practice, she said, there wasn’t any head-to-head action or players falling to the ground after a tackle. The state that brought you Friday Night Lights and more recently a sixty million dollar football stadium has adopted one of the strictest limits on high school contact and tackling at practices. DeSoto coach Paul Beattie explained, “This is a tackling circuit. The way we modified it is we’re not going to take them to the ground. We don’t want to hurt our own players.”

In this drill, players run past instead of into each other. Head Coach Claude Mathis welcomes the rule. “I saw a big improvement in our kids, in our kids’ legs, in their body language. They weren’t as tired as they were before.” 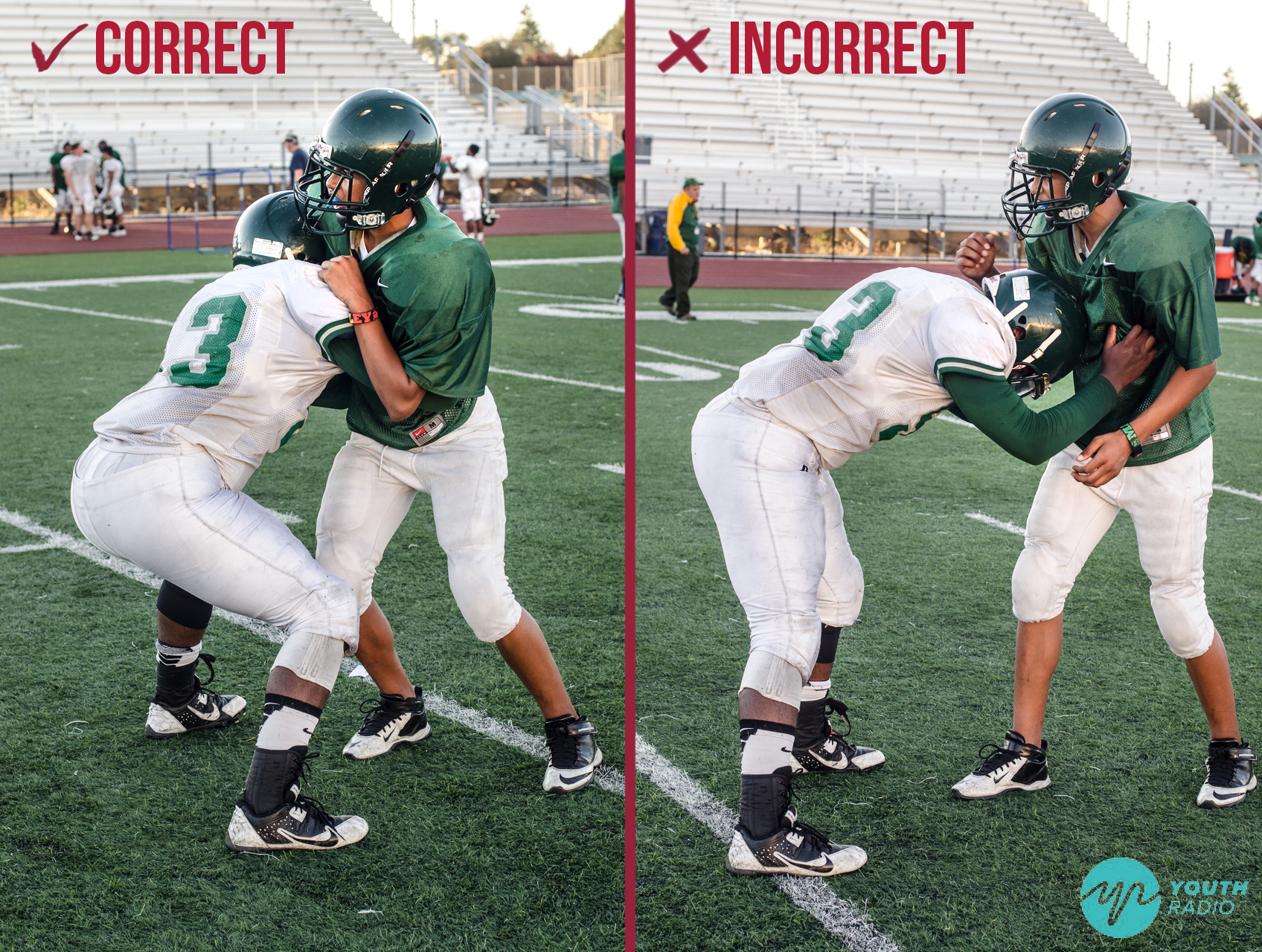 In the left image, the player’s head is up and his shoulders are absorbing most of the impact, while the right image shows dangerous head-down technique that can lead to helmet-to-helmet collisions and neck injuries. Photo: Brett Myers. Design: Teresa Chin.

Texas and Arizona both have rules in effect limiting contact during high school football practice. But most states have no regulations.

Here in the San Francisco Bay Area, if you get a concussion, you might end up at the University of California San Francisco Hospital with Dr. Carlin Senter, a primary care sports physician.

She had me take the test that he uses to check for concussions. She read me a list of random words and asked me to repeat them back in any order.

I didn’t get them all.

“You know it’s very hard to know because we don’t have a baseline. So two out of five… this isn’t so good but I don’t know. You may just not be good at remembering things,” said Senter.

So how do we figure out who just forgets “bubble” and who has a concussion?

The NFL makes all players take a medical exam at the beginning of each year. This gives their doctors a baseline assessment of players’ regular mental and physical state.

At high schools, there’s no standard medical testing for football players. Nor is there a standard requirement for medical personnel to be employed by the team. This can contribute to situations like 16-year-old Jackson Wegner’s. He plays special teams for the Novato Hornets, about 30 miles north of San Francisco.

“I went up over here by the end zone to catch ball, and I jumped up and landed on my back and my head just whipped back and slammed against the turf and… that was it,” he said.

Jackson got a concussion during practice last season but it was not diagnosed.  So he played in the next game. As kicker, he hit three field goals, before a coach came to tell Jackson’s mom, Christine Wegner, something was wrong.

“[He] said Jackson has a concussion. He doesn’t know where he is or what field goal he’s supposed to be kicking at.  And that was after he already scored all these points,” she said.

Wegner wants the team to be able to identify concussions sooner. There’s some debate about how to do that. 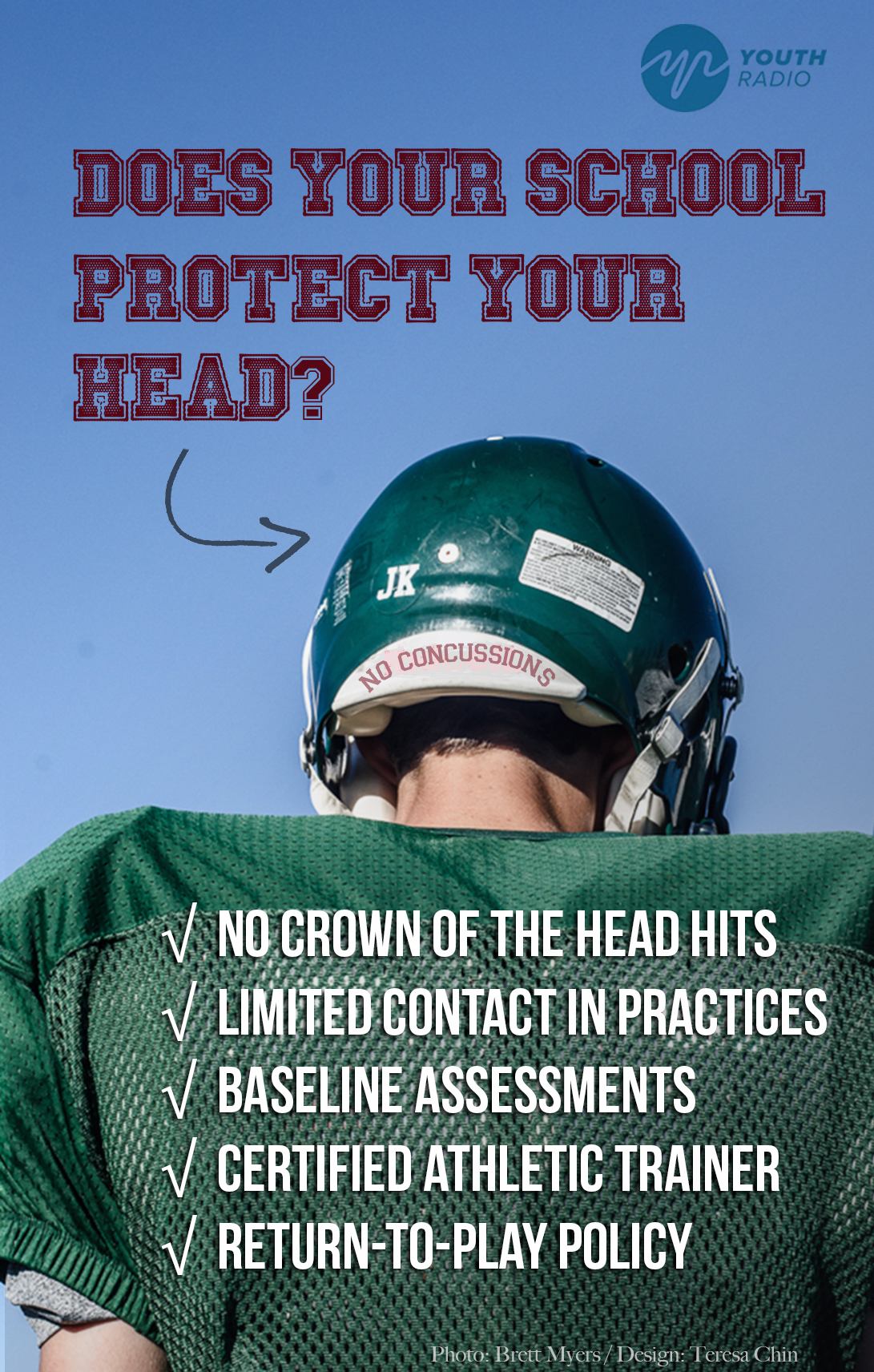 She supported her son’s team getting a baseline concussion test at the beginning of the new season.  It’s an extra expense. But Commissioner Russell White who governs all high school sports in Oakland, says it’s worth it.

“When you see the NFL doing things, high schools, colleges are not too far behind. I think it needs to happen,” said White.

Commissioner White loves the game. He’s played all his life and even made it to the NFL. But when it comes to his own children getting into football, he’s torn.

Joining a team is a decision that parents and teenagers have to make together. Check out the safety standards at your school. And understand football is a dangerous game…but dang it is fun.

Youth Radio Investigates: Is your school protecting your head?