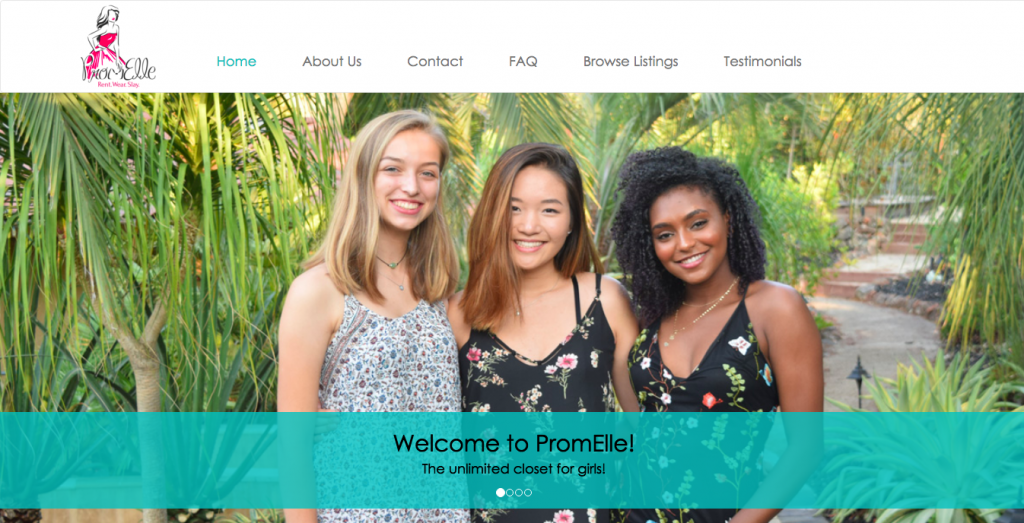 Prom dresses are expensive — on average, teens are spending upwards of $200 on a prom dress. And even if you loooooove your dress this year, there’s no guarantee you’ll have the occasion (or desire) to wear the same outfit again. So how are you supposed to ball out on prom on a budget? Two high school students saw this problem and leaped at the chance to fix it by starting their own company.

Youth Radio reporter and prom expert Finley Davis talked with 16-year-old Riya Gupta and 17-year-old Nishka Ayyar, co-founders of PromElle, an app that lets teenage girls rent and lend formal and everyday wear from each other. In this interview, Gupta and Ayyar talked about what inspired them to create this platform and how it feels like to start a business at such a young age.

Youth Radio: What made you decide to make PromElle?

Riya Gupta and Nishka Ayyar: The idea for PromElle came about in our freshman year of high school when Nishka struggled to find an appropriate dress for Homecoming that fit her budget and style. At the same time, we were partners for a project in our business class at school and Nishka’s experience led us to wonder if other girls shared her frustration. So we surveyed our peers to find out and learned that many did! This led us to think,”Wouldn’t it be awesome if there was a simple and easy way for teen girls like us to have access to high-quality dresses without wasting too much time and money?”

YR: How does PromElle work?

RG and NA: Using their smartphones, users can list their clothes by providing images and other details, usually asking for about 25 to 35 percent of the retail value as the rental price, and submitting it for review. Then, teens looking for an outfit for a special occasion or to supplement their wardrobes can now rent from the selection on PromElle. Users can browse the listings on the feed, tap to review the details, select a four-day or eight-day rental period, and complete payment and check out. At the end of their rental period, they simply pack the outfit and return it back to the lender.

YR: How long ago did you launch PromElle?

RG and NA: We launched the first PromElle app prototype in January 2017 to 15 girls in our school who tried and loved the app! This version of PromElle was released publicly on the App Store in January 2018. The app currently has over 630 users! We have users from all over the United States, but a majority of them are from the San Francisco Bay Area.

YR: Can you walk us through what it was like coming up with PromElle?

RG and NA: Building PromElle has been and still is a very exciting journey. We brainstormed and researched the idea extensively, worked on designing the app after school, on weekends and all through summer. We designed all of the user interfaces, but since neither of us code, we hired a local company to do the development of the app and our website. As with any startup, there were ups and downs, but through it all, we had a lot of fun too. We have learned things we would never learn from classes or books.

YR: What were some challenges?

RG and NA: As high schoolers, it has been challenging to balance our academic responsibilities with our responsibilities to our business. Marketing the app has been our biggest challenge, especially since we didn’t have a lot of funds available.

YR: How does it feel being young entrepreneurs?

RG and NA: There are pros and cons to being young entrepreneurs. The biggest benefit is that we are not afraid to take risks and we are not afraid of failure. We don’t have the pressure right now to pay bills or rent, and so we can try different approaches and learn from our mistakes. However, because we are young, we are often not taken very seriously and are not sure if we can actually raise venture funding to scale and build our business.

YR: Did you ever see yourself owning your own business?

Nishka: In all honesty, I cannot say that I dreamt of being an entrepreneur. In fact, I didn’t even know what entrepreneurship or owning a business even meant till I got to high school. It was only when Riya and I took a business and entrepreneurship class at school and had to come up with a solution to a community problem that the idea of PromElle took shape. But now, I definitely see myself owning and running my own business in the future.

Riya: Although I grew up surrounded by entrepreneurs and people in the business field, with my father being a venture capitalist and my mother helping create a successful company at a young age, I never imagined that I would have the capability to be one. My first true introduction to business and entrepreneurship was in 7th grade, when I took a summer course and was able to delve further into the field. However, I was still unsure about pursuing business until I took the business and entrepreneurship course offered at my school in freshman year. Once we began creating PromElle in reality and began meeting numerous influential businesspeople, I began seeing myself as a true entrepreneur.

YR: What makes PromElle stand out from other dress rental apps like Rent the Runway?

RG and NA: Companies like Uber and Airbnb have demonstrated the benefits of the peer-to-peer sharing economy. Sites like Rent The Runway are validating that the allure of “no ownership” is moving beyond housing and cars to women’s fashion. PromElle is uniquely positioned as it leverages the benefits of the sharing economy’s peer-to-peer model and its appeal to women’s fashion, and extends it to solve the age-old wardrobe dilemma faced by teen girls. [As far as we know] PromElle is the first (and only!) peer-to-peer fashion-rental marketplace exclusively for teen girls.