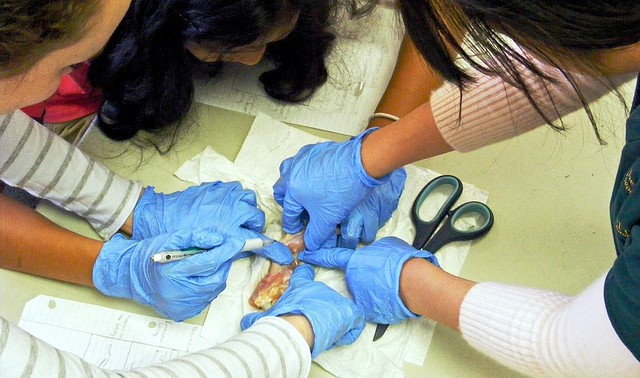 Two big takeaways include: tackling controversial issues to “combat widespread scientific ignorance,” and emphasizing scientific and engineering practices (instead of just skills) — like planning and carrying out investigations, and engaging in argument from evidence.

Barnett said teachers they work with in Oakland, Berkeley and Emeryville, CA have expressed concern about how prepared they feel to teach the new standards — making outside support even more important. “We believe scientists and engineers, who engage in these activities every day, can be great partners in adapting to these new standards,” she said.

While the transition to the new standards might be a bumpy road, Barnett ultimately feels that the change is positive. “The idea of using science content and investigations as a means to help students develop skills in critical thinking, problem solving, communication, and collaboration has the potential to transform education,” she said.

The standards are groundbreaking because they include topic areas like climate change and evolution in middle school, according to the New York Times. These particular topics have put conservative and religious groups on edge.

One of the standards in the Middle School Weather and Climate section reads:

MS-ESS3-5. Ask questions to clarify evidence of the factors that have caused the rise in global temperatures over the past century. [Clarification Statement: Examples of factors include human activities (such as fossil fuel combustion, cement production, and agricultural activity) and natural processes (such as changes in incoming solar radiation or volcanic activity).]

And regarding evolution, students will cover the following:

MS-LS4-2. Apply scientific ideas to construct an explanation for the anatomical similarities and differences among modern organisms and between modern and fossil organisms to infer evolutionary relationships.
MS-LS4-6. Use mathematical representations to support explanations of how natural selection may lead to increases and decreases of specific traits in populations over time.

Citizens for Objective Public Education (COPE), a non-profit education group, opposes the standards, saying they ignore the religious rights of parents and children, and promote an atheistic worldview. Anne Lassey, Vice President of the Board of Directors, wrote in a letter:

“Thus, beginning to teach children uncritically the tenets of unguided materialistic evolution, a ‘dangerous idea,’ in Kindergarten and continuing that teaching for the next thirteen years will have the likely effect of causing the child to come to believe in that religious idea and to eventually become one who embraces an atheistic view regarding the origin and nature of life.”

While some teachers and schools already cover this material, it hasn’t been standardized or tested until now.