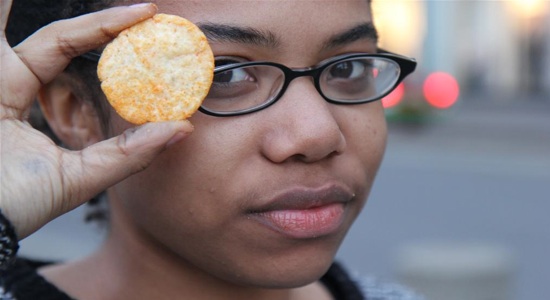 After school and evening are crunch time for most families. It’s when crucial decisions get made that affect kids’ fitness and weight—and that includes snacks. According to a poll done by the Robert Wood Johnson Foundation, the Harvard School of Public Health and NPR, most parents believe their children are eating healthy.

Deborah Richards, from Oakland, CA, thinks she has a handle on her son Donta’s eating habits. “He’s fussy but he eats healthy. He has influenced me on eating better,” said Richards. But Donta, who is 17, disagrees. “My breakfast, I can say on the daily is a pack of Skittles. I make sure I get one every morning.”

According to the poll, 87% of parents believe their children are eating healthy. But according to high school senior Felix Pieske, from Portland, Maine, they may not have the whole picture. “Middle school might have been the last time that I really talked to my parents about, ‘What did you eat today?’ Other than that, I don’t really talk to them about it at all, or talk to them at all.”

I still talk to my mom, Oya Autry. She expects that I’m keeping a good diet that includes lots of juices, water, fruits and salads and stuff. “I don’t think you eat a lot of chips, or fried foods,” she told me. That sounds right. But to be honest, I don’t make a point to keep track of what I eat. So for this assignment, I decided to keep a food diary. I’ll get to my results in a minute.

But first, my friend Jorisha Mayo. She is 18, lives in Concord, CA and loves to snack, starting right after school. “I do occasionally eat unhealthy,” said Mayo. “I think I snack probably around the three p.m. to four p.m. zone. Then when it gets later like 11 or so, that’s when I snack on cookies and ice cream, crackers and chips and stuff.” Nearly half of children say they snack on sweets everyday, and a quarter eat chips daily.

Not all kids are open about their snack habits. Dr. Lydia Tinajero at Oakland Children’s Hospital says she is aware that some kids sneak their snacks. “Some of the kids that I work with that are overweight, they feel bad sometimes that they are eating things that they shouldn’t. So they sort of hide it,” she said.

I don’t intentionally hide food from my mom. At the same time I don’t tell her every single thing I eat and she doesn’t ask. But now that I’ve got my food diary, she’s about to find out.

I started off with my first entry. For breakfast, I had a bowl of crab fried rice and four Doritos. Mom was a little surprised. “Where was I?,” she asked. “Where were you eating this stuff?” I was at home, in my own kitchen, with food she bought! I continued through the diary. She didn’t think that cough drops are a snack, but she was happy about my granola and apples. “Even those horrible snacks and weird breakfasts that I heard on the list, I think even those are fairly healthy,” she said.

I’ve always thought of myself as a healthy eater, but when I look at my food diary, I’m less sure. I’m wondering where we teenagers get our ideas about what healthy even means?

Dr. Tinajero says our concept of health comes from within. “If you are in tune with your body, your body begins to tell you.”

Which means my mom doesn’t have to.