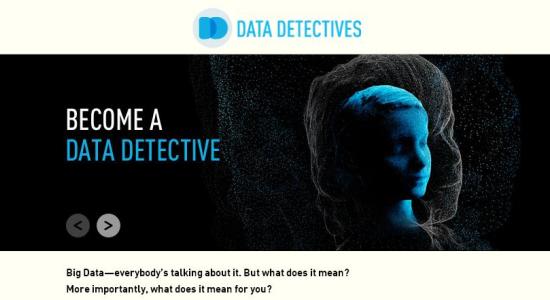 Big data. Everyone has a slightly different definition of this new buzzword.

Rick Smolan, former photographer for National Geographic and TIME Magazine and the author of The Human Face of Big Data, defined the term for us like this:

“When you take several different sources for information and you overlap them and you look for patterns in the data… It’s a little bit like watching the planet develop a nervous system. …All of us walking around with our smartphones, we’ve become human sensors. So we’re all feeding data back into this growing mass of databases, and the ability to collect data, process it, visualize it and react to it in real time is something the human race has never had before.”

Smolan gave us the following example. He said that a person’s smartphone “knows” when its owner will get sick two days before they actually show symptoms. Before someone gets sick, their activity slows down. They send fewer emails, text less and post less frequently to Facebook. “Some people might say, ‘That’s really creepy,’ but others would say, ‘If my phone told me that in two days I was going to get sick, maybe I would try to get more sleep or take some vitamins,’” said Smolan.

Big data is Smolan’s latest obsession. In July 2011, he started the project that became The Human Face of Big Data.

He asked photographers from all over the world to take professional photographs of how the world is being affected by big data. The photographs are compiled in the book, which Fed Ex agreed to ship (gratis) to Fortune 500 companies, world leaders and other influential people in the world.

Other parts of the project include a free mobile app that matches you up with your Data Doppelganger from another part of the world, and a youth project called Data Detectives that launches today. Smolan wanted to create a short web experience for 13-to-18 year olds that would show them the “cool side” of big data. They are partnering with TEDYouth and TEDxYouthDay to try out the project.

Why should young people care about big data? Smolan says because it is going to change their lives.

Smolan described big data to his 11-year-old son like this: “Imagine if for your whole life you’ve been looking at the world through one eye, and all of a sudden for the very first time you could open up a second eye. So you’re not just getting more information, you’re actually getting stereo vision and depth perception,” said Smolan.

But just because Smolan believes in the power of big data, doesn’t mean he is anti-Internet privacy. Instead, he is very concerned about who is collecting his information. “Our smartphones leave this trail of digital exhaust… Every time we tweet, buy something with a credit card, make a phone call, that information is being sold to advertisers. But we’re generating all the data, and we have no say over how it’s used. My hope with this project is that students, adults, we all start talking about this,” said Smolan.

For every download of the Human Face of Big Data app, Smolan and team will donate $1 to charity: water.