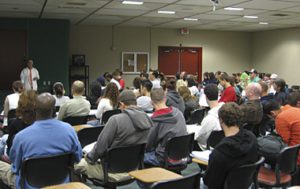 Recent studies have shown that taking a Mexican American studies class increases the likelihood of graduating and passing standardized tests, both necessary components of an academic career. Many conservatives have argued against Ethnic Studies curriculum stating that it promotes the resentment of whites, but in actuality it is more about embracing one own’s cultural, not hating another:

The argument that stands is that U.S./American history is continued to be taught as a core class while the history of other cultures, a reflection of many American student bodies, are taught as electives. It is quite obvious that the teaching of ethnic studies is of utmost importance not only academically, but for one’s self fulfillment, and to form a better understanding of institutionalized oppression.

Does your school offer any ethnic studies courses, and have you ever taken any of them?

What do you think the benefits would be for you as an individual when taking an Ethnic Studies class?

Would you like to see more of your own culture’s history taught in schools?

How do you feel about the very narrow way history is taught in your core history classes, and what is chosen to be focused on?