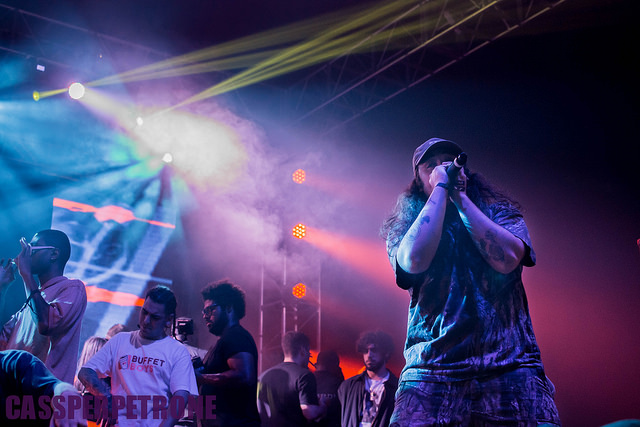 The $uicideboy$ had a concert in Oakland last Thursday night at club vinyl, a venue on 14th street. There were so many excited fans the line stretched around the corner of 14th onto Broadway. Unfortunately I was not able to buy a ticket online and the show was nearly sold out. I had been planning like crazy to go with my friends however due to whatever circumstances they chose to go see the artists perform in sacramento at Harlow’s bar and nightclub. So there I was waiting practically at the back of the line taking a chance that  I could buy a ticket at the door and talking to the crowd around me. A friend i made offered to hold my spot in line while asked if there were any tickets at the door, luckily i was able to pay my way in and even got to cut the whole line. Finally after an hours wait outside I made it inside. For awhile no real performance was happening,the dj ( Mikey the magician) was just playing us some familiar tunes while the final touches to the stage and mic checks were being made. I remember being so close to the stage i was able to shake hands with the opening performers and the $uicideboy$ themselves. For the majority of the show i was front row in the middle of all the action, getting in the mosh pit. The whole club was jumping up around like animals and having nothing but a good, crazy time, it was beautiful.

The $uicideboy$ are an up and coming underground rap group and many of their songs have deep meaning not only to them, the artists, but to us fans as well. Songs like leave your things behind 2, Diemonds, paper bag mask, and lowkey have meaning to people battling depression, addiction, and anxiety. They connect with fans a personal level that can make a person not feel alone in their struggle. Their music and performance style is very diverse compared to other musicians I know. They’ve made their own lane combining elements of trap and hardcore together along with meaningful lyrics that really connect to the audience. Ruby and scarecrow are great artists and the way they can move a crowd is inspiring. Musicians like them inspire people like me to make music that has a message, to use your voice and express yourself despite of what anyone says.

I think this important because there aren’t many artists today that really push the boundaries of music they don’t give the songs meaning that leave an impact on their audience. Another reason i think they’re so powerful is because they symbolize what you can do when you do what makes you happy and be yourself. Lastly ,this is important because many musicians are about making money and lose sight of the art aspect of music and that shouldn’t necessarily be an artist’s focus in my opinion. Make music for the love of music and art not just money.