Music has always been a vehicle for self-love in the LGBTQ community. Delivering reminders to love oneself no matter what anybody has to say. These artists help bring LGBTQ issues to the forefront of their prospective genres, by bringing their creativity, presence, and experiences into their music. Artists such as Devonté Hynes, who offers a voice for LGBTQ individuals, Sateen, who opens the space for other communities to unite with the LGBTQ community, and Dizzy Fae, who sheds light on the queer experience. They open the floor up to a much-needed conversation regarding LGBTQ issues, which has a powerful impact in the long run.

Lively synths and synthetic sounds is a signature trademark of SOPHIE, the transgender woman making some of the most bizarre and energetic pop music today. Her style is distinctively hers, equipped with heavy percussion that is chaotic, but full of pop sensibility. She builds on genres such as hip-hop, R&B, and electronic by introducing her percussion-heavy sound to the genre. She’s produced for the likes of Vince Staples, Madonna, Quay Dash, and Charli XCX— artists whose music styles are vastly different from each other, however with SOPHIE’s hand in production, they come together seamlessly.

In 2017, SOPHIE came out as a transgender woman with the song “It’s Okay To Cry.” This song along with the music video was the first time she has used her voice as well as her image in her music. Along with her use of abnormal techniques that include samples that utilize the sounds of plastic and metal as percussion and pitched vocals, her act of coming out welcomes individuality and originality which has always been at the heart of the LGBTQ Pride movement.

Devonté Hynes is the battery that powers Blood Orange, a channel of artistic expression for what matters to him. Since the start Blood Orange in 2011, Devonté Hynes has used Blood Orange as a platform for activism, especially when he uses the project to voice and show visibility on his community. For example, he brings transgender and non-binary models to be the center of his album covers. Not only that, but his 2013 album, Cupid Deluxe, is famed for recounting the struggle of NYC’s LGBTQ community; the song “Uncle ACE” describes the trials NYC’s LGBTQ youth go through. With his music, Devonté Hynes offers a voice that comforts the LGBTQ community.

Sateen is a married lesbian duo making powerful groovy disco jams. The couple consists of Queenie and Exquisite who were came up through New York’s exhilarating nightlife. Their experiences as a queer couple in NYC has significantly influences their unique presence as they bring in drag and “pin-up” looks to express themselves.

One thing to note about their music is that they don’t make it just for the LGBTQ community, while they do sing about queer themes, it’s not limited to that. Their music ultimately surrounds themes of self-love and self-fulfillment that everyone can relate to. It can pick you up on a bad day and make a good day ten times better. These are universal themes that the LGBTQ community has come to embrace, and with Sateen, other communities can embrace along with them.

The word “mystery” comes to mind when referring to Yves Tumor, the non-binary artist from Tennessee. Their music brings a sense of liveliness surrounded by fear and noise, which makes Yves’ music resemble a sonic performance. On one hand, it’s calming and ambient, but on the other, fully abrasive with how they intersect ambience with elements of soul and rock.

Along with their music, Yves’ mysterious presence brings upon a cloud of smoke that covers them and makes them hard to identify. Yves’ objection to identify as one or the other, even in their music which fails to fit a box, relates to many members of the LGBTQ community. With that in mind, Yves’ embodies a non-binary approach to music that resonates with people who don’t identify with either/or.

Dizzy Fae’s music is an interesting style as it mixes innovation that crosses with Dizzy’s classically-trained opera background. The up-and-coming R&B singer is upfront about her queer identity and her sexuality. From embracing her femininity, to opening a conversation of what she likes, to even singing about her queer encounters, she owns it fully. She invests these concepts of owning your sexuality and addressing your identity into her music and visuals with songs like “Booty 3000,” and “Her.” These songs also boast a surprising amount of experimentation that brings the sounds of R&B and electronic together like a pattern, weaving the two styles of music smoothly. 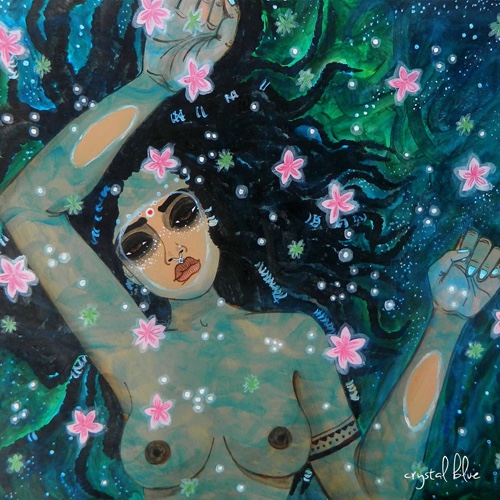