From our phones to grocery store kiosks to traffic lights, cameras are watching us, and they are here to stay. Governments, law-enforcement agencies, tech companies, even concert organizers use facial recognition to track who we are in public space. In an age when technology knows us better than we know ourselves, you might be asking: how can we hide?

These five designers are inventing ways to do just that. They’re creating style statements that outsmart artificial intelligence by making us unrecognizable to the machine. Why pick a t-shirt that just makes you look cute when you can have one that makes you disappear?

What is it?
CV Dazzle is an open source anti-facial recognition toolkit that explores how fashion, specifically hair and makeup, can be used to camouflage one’s self from new technologies. CV Dazzle was a project created by Adam Harvey as part of his NYU Master’s thesis in 2010 and is ongoing.

How does it work?
Using low-cost methods, CV Dazzle works by manipulating the expected dark and light areas of a face in relation to what computer vision algorithms look for when identifying objects. The designs can be easily achieved using hair styling, makeup and fashion accessories.

For those who don’t want to permanently cut their hair or go quite so avant-garde with the makeup, artist Leonardo Selvaggio has offered his own face, inviting users to effectively hide behind him to dodge facial recognition technologies.

What is it?
URME (pronounced “you’re me”) Surveillance is a collective dedicated to protecting the public from surveillance by providing various products that conceal a person’s true identity. It was a crowd-funded project created by artist Leo Selvaggio in 2014. His goal was to make anti-surveillance available to all, especially to those participating in protests all over the world.

How does it work?
Anti-surveillance attempts in the early 2010s were typically limited to altering the appearance of your face or completely hiding it with full-face ski masks (balaclavas). Selvaggio offers another way of hiding from cameras by supplying everyone with his own face. Therefore, rather than computer vision algorithms identifying your true identity, by wearing a URME mask, computers will identify Leo Selvaggio instead.

If you’re not keen on the idea of wearing someone else’s face or spending $200+ for a full face prosthetic, thankfully there are other options.

What is it?
REALFACE Glamoflauge offers a series of garments designed specifically to confuse Facebook’s facial recognition software that automatically tags your face in photos. Fashioned by Simone C. Niquille, this project was synthesized from her Master’s thesis in 2013.

How does it work?
The t-shirt’s pattern is composed of images taken from the public, typically celebrity faces, and remixes them in a bizarre and bold design that confuses facial recognition technology. Instead of identifying your face, these t-shirts will keep Facebook’s algorithms figuring out who exactly they’re looking at.

To my eyes the most wearable of all options, REALFACE Glamoflauge is, unfortunately, no longer running and consumers cannot buy a customized shirt. However, you can take inspiration from Adversarial Fashion’s DIY resource guide to anti-surveillance fashion.

What is it?
The CHBL Jammer Coat was designed by architecture firm Coop Himmelb(l)au in 2014 for the exhibition “Abiti da lavoro.” It exists to distract, deter and diffuse surveillance technology from recognizing your existence in any space.

How does it work?
The CHBL Jammer Coat is made of metallized fabrics that block radio waves and shield the wearer against tracking devices. While the garment keeps you safe from radio frequency identification (RFID) readers that steal credit card information, it will also make you unreachable on your mobile device, so it’s for you to decide whether the protection is worth dropping out of touch. The fabric’s pattern is comprised of dots of various sizes in a wave formation creating a “vibrating” sort of look to the coat. Its waviness is so visually busy, cameras don’t detect it.

Though the jacket itself is reminiscent of Yayoi Kusama’s work, I have a hard time believing someone looking to fly under the radar would want to go out wearing something as eye-catching as the CHBL coat. If the purpose is to deter surveillance systems, it sure draws a lot of other unwanted attention to you by the crowd.

What is it?
This wearable headgear, from a collection titled Anonymous from 2017, projects different faces on top of your own as you walk around in public. As if your face were a screen, this projector gives you a new appearance by constantly shifting through different looks.

How does it work?
As with other anti-facial recognition wearables, this projector alters the appearance of your face, making your true identity undiscoverable to cameras. The headgear also works while you are moving. In fact, it further implements the “shakiness” of the flashing images, making your face even less detectable. On top of the constant shifting through images, the brightness of the projection confuses computer vision algorithms.

This concept piece by Jing Cai Liu has found itself embroiled in the Hong Kong protests, after a tweet wrongly associated this design with defending protestors against the recent mask ban. (More on that controversy here.)

The need for anti-surveillance methods is more urgent than ever, with our privacy and safety on the line. How far will you go — style-wise and beyond — to dodge the camera’s eye? 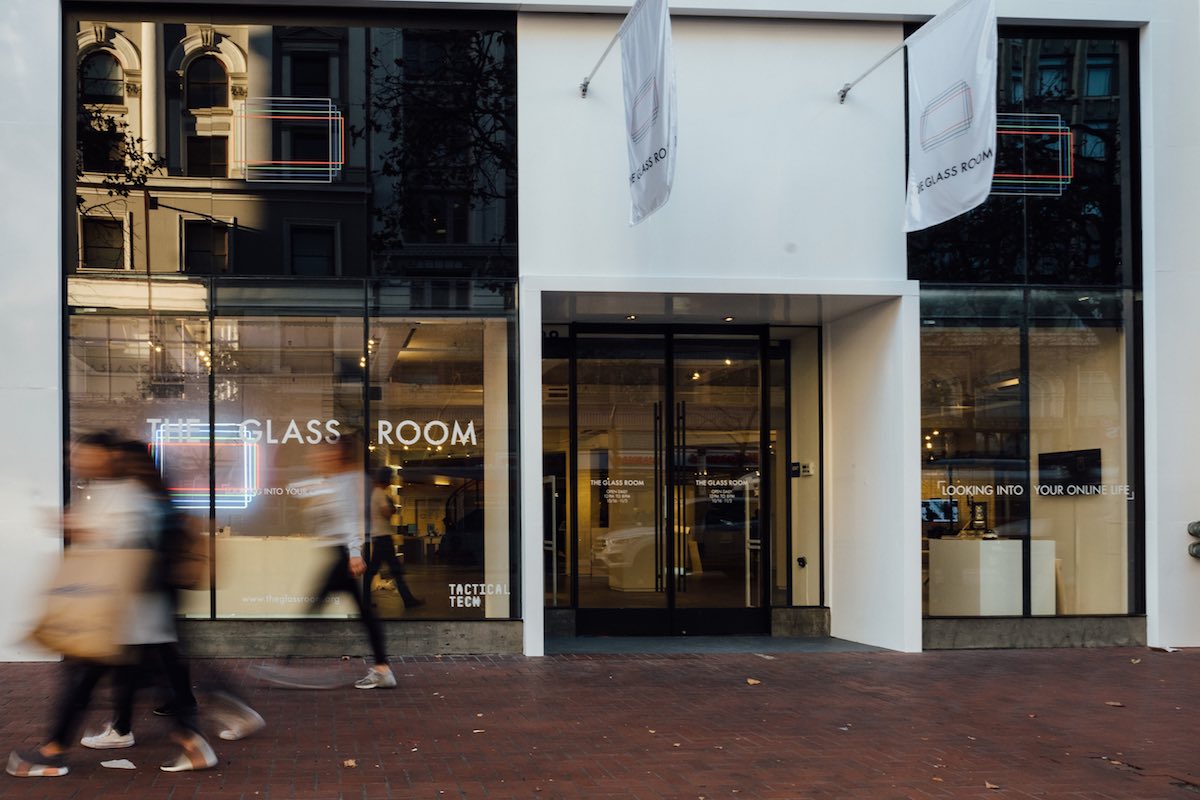