“Justina isn’t Justina without…” I type into the question box on my Instagram Stories. Now, I wait.

The responses flooded in — some funny, some painfully accurate. Turns out, my nearly-40,000 followers have been noticing things about me I’m not even conscious of, like how I only wear bracelets on one arm, or my aversion to the word “stuff” (I guess I only ever say “things”). It was a shock to realize how much of my identity was on display and that absolute strangers were tracking my moves. It also felt like a lot of pressure. There were guesses that felt wildly incorrect, but enough people suggested them that I wondered: is that who I am?

These thoughts are familiar. Like just about everyone, I spent my teenage years questioning who I was. Alas, I didn’t have polls at the time to ask other people for their input and then count up the results, so I just took the traditional existential crisis route and got bangs.

Aubrey, who’s 16, doesn’t have the luxury of hiding from the internet. She maintains a brilliantly curated social presence, complete with existential captions and daily updates on her life. She uses polls almost-daily to ask her 1000-plus followers things like how their day is going or, in a subversive move, what they think she thinks of them. On that second question, she was surprised by the response.

“I’ve learned that a lot of people actually think I don’t like them! In every instance, I make sure to let the person know I definitely do like them. Mainly it’s because I am such a quiet person,” she said.

For those of us who put a lot of stake in our friendships, this kind of information can be jarring. But how important is it really?

“These polling numbers can truly effect how you feel about the most mundane of decisions,” said clinical psychologist Danielle Ramo, who directs research at Hope Lab and is a part of the adjunct faculty at the University of California, San Francisco.

Ramo told me the problem with the quantitative data we get from social media’s newest features is that it can elevate the importance of information that might not otherwise even register. Individuals can be more geared to care about responses to a poll that they would to information presented in a caption — or if they just hadn’t asked in the first place.

Social stress has always been there, and Aubrey told me that both online and IRL, she feels pressure to be on-brand all the time. She sees herself as one of those incredibly rare teenage girls who can float between the cliques, but maintaining that balance is a 24/7 job.  It also involves soliciting a lot of opinions from people who are essentially strangers.

If that sounds exhausting, that’s because it is — perhaps especially for girls. Researcher Jean Twenge noted in The Atlantic that 48 percent more girls said they often felt left out in 2015 than in 2010, compared with 27 percent more boys. Social media has made it possible to constantly access someone else’s life, compare it to every aspect of our own, and then ask why we weren’t invited. With the introduction of polling features, we have the ability to turn what were previously qualitative thoughts and feelings into solid numbers that are on display for the world.

“Before social media, we didn’t have as much opportunity to think of our social identities in a quantified way,” Ramo told me. “Social media blew that on its head by putting our network in a quantified place.”

Tracking likes and followers is old news — and as new data gathering features are rolled out on social media platforms, we are likely to find ourselves even more caught up in counting our way to a sense of self. But Ramo cautioned against seeing this shift as inherently negative. There isn’t a lot of research actually looking at the cause-and-effect relationship between social media and mental health, Ramo told me. Even in doing research for this piece, I found hundreds of articles trying to scare people off social media, backed by pseudo-science at worse and biased responses at best. The truth is that we just don’t know yet how this is shaping us.

Kamrin Baker is a social media influencer who is currently working to educate young people about mental health and sex education — and she is one of the most “on-brand” people I know. She ticks off all the boxes: a consistent filter, an honest voice, question boxes soliciting thoughts and feelings from her audience, cute dogs. She and I have talked about how the internet shaped our lives, and I wondered how she felt about the measurement tools being integrated into our feeds.

“I am comfortable with who I am, and my “brand” is kind of soaked in painful honesty and authenticity, so if something changed in my life or I stopped liking something, I think I’d tell people how and why I got to that conclusion and feel good about it,” Kami told me. “However, there have been times where I’ll just be sitting in my house, looking at my space, looking at my Instagram feed and thinking, ‘Is this really me?’ Like, am I really all cute and floral and positive and sunshiney?”

I honestly feel this way more often than I’m comfortable with. I wonder if I’m giving up too much of who I am to people who don’t really know me, and how they feel about being offered that power. I posted something last week about a train of thought I’ve been having, out of the ordinary for my selfie/outfit/travel-littered feed, and then did a poll. “Do you guys want to see more posts like this, where I share what I’m thinking on/writing about?” The options were “yes” or “meh.”

The yes crowd won out, but they weren’t all excited about it. I got a DM from a friend who was outraged that people had voted “no”… and that I had even asked. My thoughts were so valuable, she told me, why would I ask that?

The answer is very simple: in a world where we have to constantly evolve to keep everyone’s attention, there is always going to be a struggle between “Who am I?” and “Who do you want me to be?” 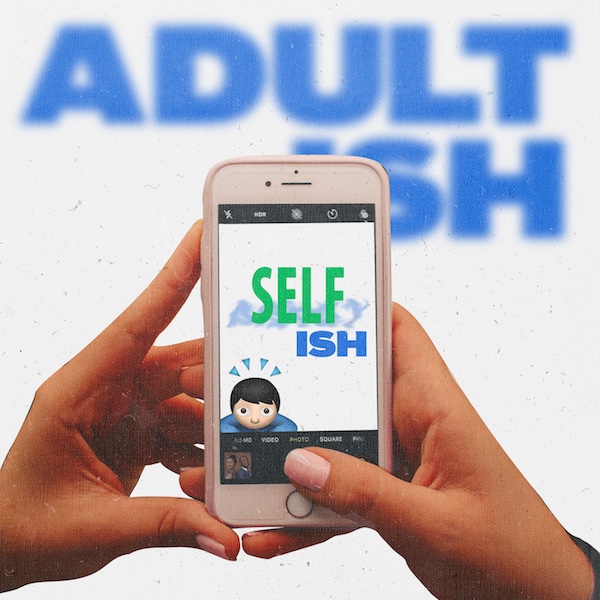